Apple did not include a power button on the AirPods Max, so there's no definitive way to turn them off, but Apple says that putting the headphones inside the included Smart Case puts them into an ultra low power mode. 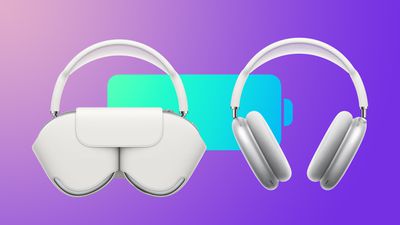 That's left a lot of questions about what happens to the ‌AirPods Max‌ when they're not inside the case yet not being actively used, so we've done some testing to attempt to figure out what's going on.

At 9:00 a.m. Pacific Time yesterday morning, we connected the ‌AirPods Max‌ to an ‌iPhone‌, played a song, and then took them off and set them down on a desk. At this time, the battery was at 63 percent.

At 10:00 a.m., the ‌AirPods Max‌ were still connected, and the same goes for 11:00 a.m. During this period, the ‌AirPods Max‌ dropped to about 62 percent right around 10:00, and then stayed at that level until 11:26 before dropping to 60 percent battery life.

At 12:00 p.m., three hours later, the ‌AirPods Max‌ remained connected to the ‌iPhone‌ over Bluetooth and did not disconnect or go to sleep. During this time, the ‌iPhone‌ was in use for various activities and also in a rest mode where it wasn't in active use. The ‌AirPods Max‌ were left alone and not touched.

Over a four hour period, the ‌AirPods Max‌ didn't disconnect and the battery life drained a total of three percent.

With a second set of ‌AirPods Max‌ and a different ‌iPhone‌ that was set aside and not used, we left them connected for more than two and a half hours and saw the same two percent drop in battery life. YouTuber Andru Edwards did a similar test and saw three percent battery drain over the course of 10 hours with the ‌AirPods Max‌ sitting out on a desk.

So while the ‌AirPods Max‌ do need the case to go into a low power mode that's the equivalent of a sleep mode, leaving them out and connected to your devices isn't the biggest hit on battery if you don't want the hassle of putting them into the case and taking them out. If you want maximum battery life, though, you need to put them in the case.

We still don't have a definitive answer on when the ‌AirPods Max‌ "sleep" when out of the case because they never appeared to disconnect from the ‌iPhone‌ in our testing without the case, but we do now have a better idea of what happens when they're used without a case.

Herrpod
Put a power button on it and it won't drain at all. What a stupid design.
Score: 79 Votes (Like | Disagree)

F23
thank you for testing this. 8% overnight compared to <1% if it was fully turned off is pretty bad for something this expensive.
Score: 33 Votes (Like | Disagree)

How good is the microphone sound quality on these?

I used it on one phone call and nobody complained. Though I was annoyed that I couldn’t hear myself talk because of the noise cancellation - I had to hit the button to toggle it into transparency. Would be nice if it took care of that for you, since the phone knows you are on a call and hearing yourself talk would be helpful.
Score: 17 Votes (Like | Disagree)

payup
Mine drained 6% between 1am and 9am. They should add power off via long hold of the transparency button. Coming from QC35s that I charge like once per 1-2 weeks, this kind of sucks.
Score: 16 Votes (Like | Disagree)

Do I want to have to press a power button every time I want to turn them on and off, OR do I want to have to charge more often? I think I'd rather have an instant on device that I have to plug in every few uses. But I'll find out IRL whenever my headphones finally ship....

Having a power button wouldn’t force you to use the power button, of course. Just like you don’t have to use the case.
Score: 11 Votes (Like | Disagree)
Read All Comments