Shazam has today been updated with a new design, notifications for missed or offline Shazams, global trending Charts, and sync improvements. 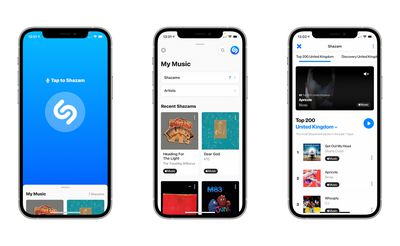 Shazam 14.2 brings a refreshed look to the music-discovery app, with a simpler swipe-up card to access your past Shazams and an improved design. Shazam will now actively search for a user's missed or offline Shazams and notify them when they are found.

Apple acquired Shazam in 2018, and has been gradually bringing the app into closer alignment with ‌Apple Music‌ ever since.

Update: Apple has also launched Shazam as a web app for this first time at shazam.com, as spotted by 9to5Mac. The website has launched in beta and is currently only compatible with Safari, Chrome, and Firefox on macOS and Chrome OS, allowing users to check Charts and identify music directly from a browser.

A song you heard where Shazam was unable to identify it, either because it didn’t recognize it, or because connectivity trouble kept it from uploading the snippet. It can go back and fill these in later now. Cold case files for songs.
Score: 5 Votes (Like | Disagree)

iapplelove
What the heck is a missed Shazam ?
Score: 5 Votes (Like | Disagree)

What I came here to ask!
Score: 3 Votes (Like | Disagree)

Glad I'm not the only one with that thought.
Score: 3 Votes (Like | Disagree)

Shazam is one of my favourite apps just because I can be out and hear a piece of music that I love and would otherwise have no chance of identifying.

However... there needs to be a way to save your searches to a personalised account. When my phone last crashed it lost years of searches and there's no cloud account to retrieve them from.

iCloud sync has been available on Shazam for quite a while.
Score: 2 Votes (Like | Disagree)

AppleTO
I don’t use Shazam much, but every time I do, I feel like it looks completely different.

Is it just me, or do they overhaul this app a lot?
Score: 2 Votes (Like | Disagree)
Read All Comments