Apple's new Fitness+ workout service launches later today, and ahead of time, some media outlets and YouTube channels have shared their first impressions of the platform. We've gathered up some opinions and videos below. 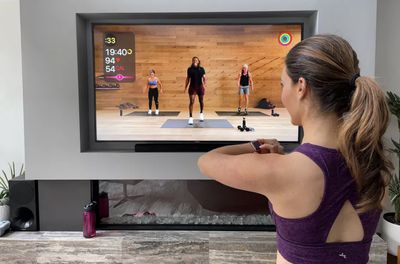 CNET's Vanessa Hand Orellana trying out Apple Fitness+
As a refresher, Fitness+ will provide users with access to a library of workout videos covering strength, yoga, dance, running, walking, cycling, rowing, and more, with new content delivered each week from a team of trainers hired by Apple. Fitness+ integrates personal metrics such as heart rate from the Apple Watch to motivate users, animating them on the screen during key moments in the workout.

Priced at $9.99 per month or $79.99 per year, Fitness+ requires iOS 14.3, iPadOS 14.3, watchOS 7.2, and tvOS 14.3, coming later today. The service will be available through a new tab in the Fitness app on iPhone, while iPad users will be able to get the Fitness app from the App Store. On the Apple TV, the Fitness app will automatically appear once users install tvOS 14.3. The service requires an Apple Watch Series 3 or later.

CNET's Vanessa Hand Orellana notes that Apple Watch integration helps set Fitness+ apart from competitors, as does its "beginner-friendly" approach that provides users with both standard and beginner variants of exercises:

Under normal circumstances, I would have been too intimidated to even go near a rower at the gym. But Fitness Plus makes it easier to step out of your comfort zone with an entire beginners section with short, easy workouts along with a "getting started" video that teaches you how to use the equipment.

Hand Orellana believes that Fitness+ is a "no-brainer" for Apple Watch users, although she said it is not the best option for very experienced exercisers looking for personalized feedback on form, as the service seems to be targeted at a broader audience:

Fitness Plus is a no-brainer if you already own an Apple Watch, or are considering getting one, as you get a free three-month trial. It's also included as part of the $30 a month Premier Apple One subscription bundle. But with so many fitness apps out there, it's probably not reason enough to buy an Apple Watch.

It's also not the best option if you're a pro in any of the workout categories, or you're really looking to hone your skills, as it seems to be geared for a broader audience and it can't offer personalized feedback on form.

The Wall Street Journal's Nicole Nguyen believes that Fitness+ is a "great value," but she found it doesn't quite stack up to Peloton's workout service. One advantage to Fitness+ is that workout videos can be downloaded and played offline:

Overall, Fitness+ feels like a Peloton Digital Lite (which doesn't otherwise exist). Apple's app and Peloton Digital have high production value, motivating music playlists and charismatic trainers. But Fitness+ doesn't have as many workout types, and the library of workouts isn't as large. It also lacks Peloton's live and social features. The Apple app does have one edge over Peloton's: You can download classes and play them offline. While you can preload Peloton content for more stable playback, the workouts require an active internet connection to play.

Fast Company's Mark Sullivan believes that most Fitness+ workouts are best viewed on a TV, rather than on an iPad or iPhone:

For most workout types, Fitness+ is probably best when displayed on a big TV in front of you. The iPad works fine for some workouts—like yoga or strength training—but the iPhone is just too small.

Apple Fitness+ will be available later today in the United States, Canada, Australia, New Zealand, Ireland, and the United Kingdom. Apple is offering a one-month free trial to all users, and an extended three-month trial to customers who purchased a new Apple Watch Series 3 or newer after September 15, 2020.

Hammerd
Let me be fat
Score: 24 Votes (Like | Disagree)

Plus the moves are too hard and all the beautiful people make me feel like a loser.

How have you ordered it and canceled already when it isn’t available yet?
Score: 22 Votes (Like | Disagree)

Let me be fat

My favorite workout is shoveling food into my mouth
Score: 12 Votes (Like | Disagree)

jonproject
Connect with our bluetooth equipment please. If the Peloton app can connect to my Schwinn IC4 to display cadence and account for it accordingly, so should this.
Score: 8 Votes (Like | Disagree)

orbital~debris
Extremely enthusiastic to try this.

It's encouraging to read that Apple have taken care to be inclusive of beginners.
Score: 8 Votes (Like | Disagree)
Read All Comments