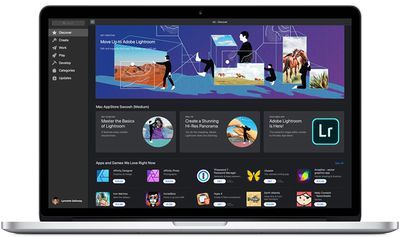 Adobe has been working to bring its Creative Cloud apps to Apple's new Macs. Adobe announced the release of Photoshop Beta for Apple silicon last month and says it is working on a native version of Lightroom Classic for Apple silicon that will be released next year.

Earlier versions of the photo-editing app worked on ‌M1‌ Macs, but had to be run via Apple's Rosetta software, which translates made-for-Intel x86 code to allow it to work on machines powered by Apple silicon.

The professional photo editing software is free to download, but requires a $9.99 monthly subscription via Apple's in-app purchase system after a one-week trial. 1TB of cloud storage is included with a subscription.

In addition, Adobe Photoshop for iPadOS got a quick update today that fixes a critical bug that caused file import and brush problems.

Adobe on Monday also updated Lightroom for iPad. Version 6.1.0 of the app allows users to access to new Discover edits and Learn tutorials through widgets.

newdeal
this seems to be a popular software for reviewers of the M1 to use so I look forward to a slew of YouTube videos comparing performance of the M1 in rosetta vs native using this app even though I will never use it myself
Score: 4 Votes (Like | Disagree)

The whole industry hasn’t. A lot of companies still offer their products as a purchase, instead of as a rent. Some companies offer both models, with certain differences to entice customers into the subscription model.

As a customer, I don’t find compelling renting software, so I’ll stick with traditional purchase model or move to open source. I haven’t followed adobe since I ditched lightroom, but if memory serves, it hasn’t been a plethora of updates since the move to subscription only.

The whole industry has moved... you just haven't realized it yet.

Look at the largest players in this market: Apple, Microsoft, Adobe, etc. Look at all of the games studios, including the biggest ones (Blizzard, Epic, etc.).

It's only a matter of when, if they have not moved already. You can always find exceptions of course, just as you can still find a horse-drawn buggy.

And there have been lots of updates to Lightroom, except that they trickle in one or two at a time per update. You might not realize it because they don't come in a pack of 50 features at once.

What many customers like you do not realize, is that customers expect things from software that were *never* expected of software when it was sold in a box on a floppy disk or even CD. You want security updates? New features after release? These were never expected of traditional software. You were lucky to get a patch for a bug fix, once or twice, but certainly not at the frequency they come at now. (And software now is a lot more complicated, so there are more problems.) More frequent updates are never truly free. Someone's gotta get pay the developers. Since the requirements have changed, it's only sensical for business models to change too.
Score: 4 Votes (Like | Disagree)

avatar77
Though LR Classic is undoubtedly more powerful, count me in the camp of users who prefer "CC" (Adobe dropped CC from the name BTW - it's just Lightroom). It feels like a modern app. Classic's interface with cloud files is messy and the UI is cluttered. I just wish Lightroom and LR Classic had feature parity.
Score: 3 Votes (Like | Disagree)

I’ve always wondered how popular the CC version of Lightroom is. You don’t hear much talks about it these days.

Indeed. I thought most are still using the "Classic" version, as it has more features and doesn't run into the storage issues.

The storage issues being both capacity (1TB is not enough when one of Lightrooms primary use cases is as a DAM), pricing and that you have to use Adobe's cloud rather than e.g. your own NAS.
Score: 2 Votes (Like | Disagree)
Read All Comments