Spotify's Annual 'Wrapped' Feature Looks Back on Your 2020 Listening Habits

Spotify's annually hosted Wrapped experience went live today, offering subscribers a look back at their listening habits over the year. 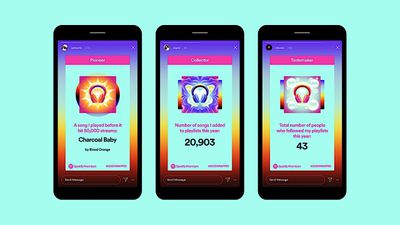 Delivered this year via the mobile app and in a Stories-style format, the company's year-in-review offers a microcosm of your listening over the last 11 months, including top songs, artists, genres, and podcasts.

Users then move onto a short quiz where they get to guess their top songs, artists, and genres over the course of the year, before being revealed the results.

The site then provides "Your Top Songs of 2020", collected in one playlist, as well as a playlist titled "Missed Hits", which includes a selection of unplayed tracks released in 2020 that are "based on what you love", according to Spotify.

In addition, listeners in the U.S., UK and Ireland, Australia, New Zealand, and Canada can dig deeper into some of their top artists of 2020 in On Record, a mixed media experience that highlights your top 2020 artists.

As well as the Wrapped feature, Spotify this week released its Year in Music lists, which revealed that Puerto Rican rapper Bad Bunny was the service's most streamed artist globally in 2020, racking up 8.3 billion. Meanwhile, Billie Eilish was the most streamed female artist of the year, followed by Taylor Swift and Ariana Grande in spots two and three.

Apple Music provides users with its own year-in-review feature, called Apple Music Replay, although it's relatively paltry compared to Spotify Wrapped, offering listeners only a web page with a list of their most listened songs and artists, with accompanying playlists in the mobile app.

Thankfully I do not really listen to music! Unless it is in a actual movie or tv show.

sdz
spotify is much much superior to apple music.

At least I am not getting thug music recommended by Spotify. That is an HUGE Plus!

they said "thankfully" too haha
Score: 6 Votes (Like | Disagree)

otternonsense
If only it was as accurate as it is flashy. My algorithm/playback habits have been permanently ruined by just a couple of months of listening to sleep playlists. All of this could have been avoided if Spotify had taken heed to one of the ideas in its own forums (submitted in 2016) where a user can choose to exclude lists from their music taste profile. Alas, Spotify admins marked it as "not right now" (aka. not ever). I haven't listened to a relaxation/sleep playlist since August and my Discover Weekly is yet to change back to something reminiscent of what I enjoy listening to, and I do listen to music all day. Go to hell, Spotify.
Score: 4 Votes (Like | Disagree)

calpal
Well I learned that I am still really into Avril Lavigne.
Score: 4 Votes (Like | Disagree)
Read All Comments

Saturday May 1, 2021 3:57 am PDT by Sami Fathi
Citing sources within the music industry, Hits Double Daily reports that Apple is preparing to launch a new HiFi Apple Music tier in the "coming weeks," which will come alongside the release of the rumored third-generation AirPods. According to the report, the new tier, which will offer high-fidelity music streaming, will cost the same $9.99 monthly subscription as the current individual...
Read Full Article • 257 comments

Tuesday May 25, 2021 8:50 am PDT by Joe Rossignol
Tidal this week released an Apple Watch app, allowing subscribers to stream music and control playback directly on their wrist, without an iPhone nearby. The app is available through the App Store on watchOS. Tidal on the Apple Watch provides access to tracks, albums, playlists, and downloaded content that can be listened to offline from anywhere without internet connectivity. Apple Music...
Read Full Article • 57 comments

Thursday April 29, 2021 7:51 am PDT by Sami Fathi
Spotify today announced a redesign coming to "Your library" for users on iOS and Android with the aim of making it easier to locate and find songs, podcasts, and more thanks to dynamic filters, a new Grid view, and more. Spotify says these changes will be rolling out to all users on iOS and Android in the coming weeks, so not everyone will see them immediately. Two of the most striking...
Read Full Article • 47 comments

Thursday March 25, 2021 9:53 am PDT by Juli Clover
Spotify today announced that it has overhauled its desktop app and web player with an "improved look and feel" that offers design parity and also makes both the app and the web experience easier to use. According to Spotify, it took "months" of tests, research, and user feedback to develop the new, cleaner design that's simpler while also offering all of the useful features from the desktop...
Read Full Article • 57 comments