Apple could add Force Touch sensors to the OLED Touch Bar on a future MacBook Pro if a new patent application by the company ever comes to fruition. 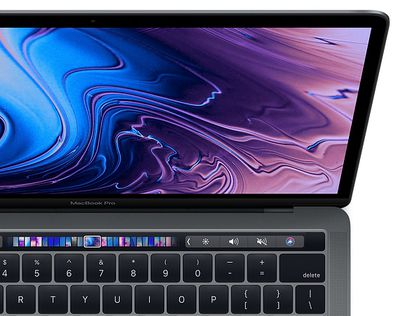 The original Apple Watch was the first device to feature Force Touch, which sensed extra pressure when users pressed firmly on the display, allowing them to access additional content and controls depending on the context.

In 2015, Apple added the haptic feedback technology to the iPhone 6s in the form of 3D Touch, which featured Peek and Pop gestures, and brought Force Touch sensing technology to the MacBook Pro trackpad the same year.

Perhaps as a result of its lack of discoverability, Apple dropped support for Force Touch on Apple Watch with the release of watchOS 7, and ‌‌3D Touch‌‌ went the same way on ‌iPhone‌ when it was replaced by Haptic Touch (aka long press) in the ‌iPhone‌ XR and subsequent models.

However, the new patent published by the US Patent & Trademark Office, spotted by Patently Apple, suggests Force Touch could have an expanded role in future on the Mac, with the development of a new pressure-sensitive Touch Bar.

Filed in 2019, the patent is short on finer details, but does offer visual examples of how force-sensing technology would be implemented in a MacBook Touch Bar, with Force Touch circuitry surrounding the touch-sensitive OLED strip.

The Touch Bar for MacBook Pro was introduced in October 2016, with a Touch ID sensor integrated into the power button. The control strip has replaced the top row of function keys on most MacBook Pro models ever since, and its usefulness continues to divide opinion.

Would you be interested in seeing Force Touch added to the Touch Bar, or is it time for Apple to drop the OLED strip altogether and bring back the function keys? Let us know in the comments.

Mythos99
I would really love, if they would make a 16 MBP without the touchbar. Just give the users a choice :).
Score: 62 Votes (Like | Disagree)

jonplackett
There’s this other invention, created a while back but it’s still a goodie.

You press down on it using force, a lot like force touch, except it actually loves, and then something happens. I think it’s called a ‘button’ or sometimes a ‘key’.
Score: 26 Votes (Like | Disagree)

bountyofcolors
Lipstick on a pig.
Score: 23 Votes (Like | Disagree)

Marbles1
The Touch Bar would be useful if it somehow had physical buttons - which could dynamically change according to the layout.

icymountain
If the touchbar was such a wonderful idea, I think the external keyboards would have it by now, almost five years after introduction.
Score: 18 Votes (Like | Disagree)
Read All Comments

Monday October 18, 2021 6:27 pm PDT by Joe Rossignol
As we predicted, Apple's new MacBook Pro models unveiled today feature a redesigned keyboard with an all-black design, a row of full-size function keys, and a Touch ID ring that provides a more tactile experience for unlocking the Mac with your finger. The function keys include new shortcuts for Spotlight, Siri, Dictation, and Do Not Disturb, in addition to usual shortcuts for display...
Read Full Article • 174 comments

Monday October 18, 2021 2:14 am PDT by Tim Hardwick
Apple's new 14-inch and 16-inch MacBook Pro models will feature a redesigned row of function keys that replaces the Touch Bar, and each modifier key will have the same width and height as the alphanumeric keys on the rest of the keyboard, according to rumors and leaked schematics seen by MacRumors. Full-size function keys and Touch ID button on iMac Magic Keyboard It's been a hectic few days...
Read Full Article • 166 comments