In the last of its iPhone 12 series teardowns, iFixit has published its iPhone 12 Pro Max disassembly, which reveals some unique differences in the design of the internals, including the full extent of the larger camera system responsible for the improved low-light performance on Apple's largest iPhone to date. 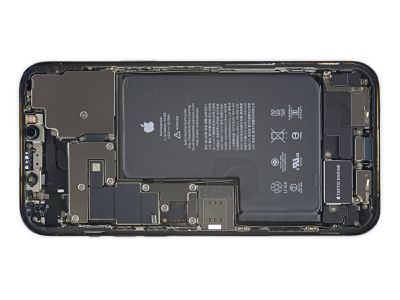 Moving on, iFixit was most impressed camera package, which is a lot bigger than the one in the ‌iPhone 12‌ because of Apple's sensor choice.

Sorry to break it to you, but size does matter—at least when it comes to camera sensors. To achieve their alleged 87% improvement in low-light performance, the 12 Pro Max uses the biggest sensor in an iPhone yet.

As the below x-ray of the camera package shows, the standard wide camera (bottom left in the group of three) has a 47% larger 12-megapixel sensor than the ‌iPhone 12‌, which allows more light to enter, resulting in better photos.

The four magnets surrounding it also underline the presence of Apple's brand-new sensor-shift image stabilization system, which moves the sensor thousands of times a second to compensate for hand shake.

As iFixit notes, most smartphones use lens-based optical image stabilization (OIS) to smooth out jitters, so Apple either decided its own system was a better solution, or it couldn't adequately stabilize the larger version of its new f/1.6 lens.

Elsewhere, iFixit highlights the more compact design of the logic board compared to the ‌iPhone 12‌, as well as the modular SIM card reader, which is "excellent for repair, if a little oddly placed," and rubber gaskets instead of adhesive to affix the speakers, which makes for a "much easier removal and replacement procedure than in years past."

The ‌‌iPhone 12‌ and ‌iPhone 12‌ Pro earned a repairability score of 6 out of 10, and the ‌iPhone 12‌ Max gets the same, thanks to Apple's continued use of proprietary screws, the devices' increases in waterproofing that can complicate repairs, and the increased chance of breakage due to glass on the front and back of the two devices‌.

Still no mention of PWM problems with OLED screens by Macrumors. The whole iPhone lineup is OLED now and it causes major problems including health effects for a subset of affected users. And nothing. For some reason Macrumors refuses to do any news about this, despite several threads right here on this site with thousands of comments.

I would also add that looking for info about the issue online, only a few quite dubious websites come up, some of them refers to "many studies proving..." without linking to any of these studies, and when searching for these studies on Google Scholar or elsewhere there is no trace of them. The only one article on Medium that apparently gives some more technical information about this issue, is from a software company that sells an app to avoid the issue. Honestly this look like a few people with eye issues and headaches trying to find online a reason for this issue, instead of going to an ophthalmologist and have it solved.
Score: 32 Votes (Like | Disagree)

farewelwilliams
i've been ending the day with 45% left on pro max. and that's after forgetting to charge the night before
Score: 10 Votes (Like | Disagree)

Disagree with their Analysis !

The "Border" would NOT be used for Sensor Shift color-sampling.

What are you talking about? Sensor Shift is described as image stabilization. Other than bad math of the size of this "border," where is the conspiracy?

For some UN-known, a Lack of Basic Common Sense has run rampant over the internet the past few years !

Check your work before blaming others.
Score: 8 Votes (Like | Disagree)

TechGod
My 12 pro max battery is already quite nuts but man would it have been cool to keep the 11 Pro Max battery size
Score: 8 Votes (Like | Disagree)

i've been ending the day with 45% left on pro max. and that's after forgetting to charge the night before