It was a week full of unboxings this week, with Apple's new M1-based Macs and the HomePod mini making their way into customers' hands for the first time. We're seeing impressive performance from all of the new products, and it'll be super interesting what Apple is able to do with its higher-powered Macs as the transition to Apple Silicon continues. 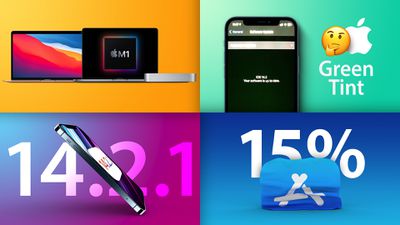 This week also saw the release of a special iOS 14.2.1 update for the iPhone 12 lineup to address a few early bugs on those devices, and Apple announced a new App Store program that will cut its commission in half for developers who earned under $1 million from the App Store in the previous year. Read on for all of the details on these stories and more!

The first Macs with Apple's custom M1 chip began arriving to customers Tuesday, and there has been quite a bit of excitement surrounding the launch, as performance has proven to be quite impressive.

There are already quite a few popular apps that have been optimized with native support for Apple Silicon, including Pixelmator Pro, Fantastical, BBEdit, Affinity Designer, Twitter, Darkroom, and djay Pro AI. A crowdsourced list of universal Mac apps can be found in the MacRumors forums.

To further demonstrate just how impressive the M1 chip's performance is, MacRumors forum member iChan shared a video in which he opened every default app in the Dock on the new base model MacBook Air, and the notebook handled the task with ease. We also performed our own tests pitting the new M1 MacBook Air against the equivalent Intel model from earlier this year, and it wasn't much of a contest.

These feats are even more impressive considering that the base model MacBook Air is equipped with just 8GB of memory and has a silent, fanless design, making it exciting to see what Apple will achieve with its M-series chips in higher-end Macs to come.

Rumors suggest that future Apple Silicon Macs will include new 14-inch and 16-inch MacBook Pro models with an all-new form factor as early as Q2 2021, in addition to a redesigned 24-inch iMac and a smaller version of the Mac Pro.

Apple's new HomePod mini also began arriving to customers this week, and we picked one up to see how it measures up to the full-size HomePod.

‌HomePod mini‌ measures in at just 3.3 inches tall and 3.9 inches wide, so it's a good deal smaller than the standard ‌HomePod‌. Despite its compact design, we were impressed at the sound that the speaker was able to put out.

Priced at $99, the HomePod mini is a more budget-friendly competitor to the Amazon Echo and Google Home, while still offering many features of the full-size HomePod, including Siri, HomeKit integration, Apple Music, Intercom voice messaging, and stereo pairing with another HomePod mini.

Apple's iPhone 12 models have had a few bugs since their release, and Apple cleaned up several of them this week with the release of iOS 14.2.1, which is only for the iPhone 12 family.

Apple this week announced a new App Store Small Business Program that will allow developers who earned up to $1 million in post-commission earnings during the previous calendar year to qualify for a reduced 15% commission on the sale of apps and in-app purchases tied to digital goods and services.

The program is set to launch on January 1, 2021, and Apple will be sharing comprehensive details in early December. In the meantime, Apple outlined the following parameters:

In an internal document for technicians this week, obtained by MacRumors, Apple has acknowledged an issue with some iPhone 12 displays exhibiting flickering, a green or gray glow, or other unintended lighting variations under some conditions.

Apple says that it is aware of customer reports related to this issue and is investigating. Apple has advised technicians to avoid servicing affected iPhones, at least for now, and instead inform customers that they should keep their iPhone up to date with the latest iOS version. This guidance suggests that Apple may be confident that it can fix the issue in a future software update.

If your thinking of buying a Mac Mini, then it seems that a 10 Gb ethernet option is coming soon, if you have the expensive ethernet setup to support it.

I have fiber optic direct into my house, yet I never get close to 1 gb let alone 10. (I currently have the 2018 mini with 10 gb.) So I don't think I'll be missing very much with the 1 gb connection, at least for several years until higher bandwidth is more prevalent in my area.
Score: 2 Votes (Like | Disagree)

Looks like Apple caved with that Epic lawsuit. 15% instead of 30% commission is the right direction.

That wouldn’t apply to Epic. Fortnite probably made $1m a week on virtual pants alone.
Score: 1 Votes (Like | Disagree)
Read All Comments

Friday June 24, 2022 9:48 am PDT by Juli Clover
The next-generation AirPods Pro could come with a long list of new features that include heart rate detection, the ability to function as a hearing aid, and a USB-C port according to a report from 52Audio. The site claims that it has received new information on the AirPods Pro 2, and it has used that information to provide some renders on what the earbuds might look like. Design wise, there...
Read Full Article • 119 comments