OWC has announced that its upcoming Thunderbolt Hub will be compatible with all Apple M1 and Intel Macs equipped with Thunderbolt 3 ports and running macOS Big Sur, offering users the ability to expand the number of available Thunderbolt ports. 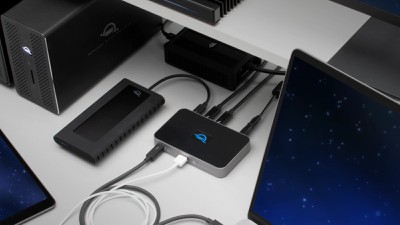 The OWC Thunderbolt Hub connects to a host computer over a Thunderbolt 3/4 port and provides three additional Thunderbolt ports (which are also compatible with USB-C) and one USB-A port. Each of the three downstream Thunderbolt ports can host its own daisy chain of peripherals and support transport speeds of up to 40Gb/s, subject to the overall limit of 40 Gb/s for the connection from the host computer.

The OWC Thunderbolt Hub is priced at $149.99 and is available for pre-order now ahead of an early December launch.

macizcool
Thunderbolt has been out for like 9 years. Can someone explain why all of these hubs are still so expensive?
Score: 12 Votes (Like | Disagree)

Acidsplat
I'd consider myself a pro user, and I've been using a MacBook Air M1 with 8-core GPU and 16GB of RAM and couldn't be happier. A product like this that can add more Thunderbolt ports is the cherry on top.
Score: 5 Votes (Like | Disagree)

dmille6
.. i didnt think you could split thunderbolt.. i thought you could only daisy chain it.. what kind of devils magic is this?
Score: 4 Votes (Like | Disagree)

Because electrically there is no difference between TB3 and TB4. TB4 is more of a certification, it requires full TB3 feature set in the host, along with secure memory access which wasn't present in older host controllers. They added hub support, but apparently there wasn't anything preventing it before in the protocol.
Score: 4 Votes (Like | Disagree)

Thunderbolt v4 is a bit skewed toward Intel. Not too surprising. Their gen10 and gen11 U series processors with integrated TB controllers have a four DisplayPort v1.4 stream attached so meet the spec. ( also all get a clean switchedd x4 PCI-e v3 feed also) . But it is also more uniform. If it is a TBv4 system then it doesn't matter which port you choose it will always have a video signal present. ( so you don't have pull out your USB4 symbol decoder ring to find out which feature is on which port on which system. ). TBv4 is largely about not having to worry what part of the optional parts of the USB4 specification the system implementer skipped.


There was a recent posting the seemed to indicate that Apple's integrated TB controller has the baseline ability but just isn't fed the four streams from the internal iGPU. So the M1 comes up short probably based on having a limited iGPU.
Insert a more capable iGPU into the Apple Silicon die and then Apple could get the TBv4 label ( if they bother to go through certification process ) .
Score: 3 Votes (Like | Disagree)

USB4 is largely based on Thunderbolt, however, there are material differences in regards to implementation (signaling rates, power delivery, etc.). Thunderbolt 3 interoperability is optional, not required, for USB4 hosts and devices.

The reason why Thunderbolt has historically been strictly a daisy-chain topology is that Intel never produced a Thunderbolt controller with more than 2 ports. You can't build a bigger switch/hub with only 2-port switches. That all changed when Intel recently released the 4-port JHL8440 "Goshen Ridge" ('https://ark.intel.com/content/www/us/en/ark/products/189982/intel-jhl8440-thunderbolt-4-controller.html') controller. OWC's device appears to be first to market and very reasonably priced, but I'm sure more vendors will soon follow.
Score: 3 Votes (Like | Disagree)
Read All Comments

Tuesday February 9, 2021 4:45 pm PST by Joe Rossignol
Apple today released macOS Big Sur 11.2.1 to address an issue that may prevent the battery from charging in some 2016 and 2017 MacBook Pro models, and the company has since shared a new support document with more details. Apple says a "very small number of customers" with 2016 and 2017 models of the 13-inch and 15-inch MacBook Pro have experienced an issue with the battery not charging past...
Read Full Article • 97 comments

Wednesday February 3, 2021 9:30 am PST by Joe Rossignol
CalDigit today introduced a new "Element Hub" dock, equipped with four Thunderbolt 4 ports and four USB-A ports for connecting external displays, storage drives, and other peripherals to devices like a MacBook Pro or iPad Pro. For data transfer, the Thunderbolt 4 ports provide speeds up to 40Gb/s, while the USB-A ports can reach up to 10Gb/s. Given that Thunderbolt 4 shares the same...
Read Full Article • 79 comments

Wednesday April 21, 2021 10:31 am PDT by Juli Clover
Schematics stolen from Apple supplier Quanta Computer outline Apple's plans for the next-generation MacBook Pro models that are expected in 2021, and clearly confirm plans for additional ports and a return to MagSafe. MacRumors saw the schematics after they were leaked online, and some of them feature the logic board of the next-generation MacBook Pro. On the right side of the machine,...
Read Full Article • 787 comments

Wednesday July 8, 2020 7:15 am PDT by Eric Slivka
Intel today shared some new details on the upcoming launch of Thunderbolt 4, which is set debut later this year. While Thunderbolt 4 won't deliver any increase over the maximum 40 Gb/s available on Thunderbolt 3, there are some notable improvements such as universal cables up to two meters long without needing to resort to active cables that omit support for slower USB standards as on...
Read Full Article • 101 comments