Google earlier this week released a version of Chrome designed specifically for Apple's M1 Macs, and those with a new MacBook Air, MacBook Pro, or Mac mini will want to download the Apple Silicon specific version of Chrome because it's going to run faster than the x86 version working through Rosetta 2. 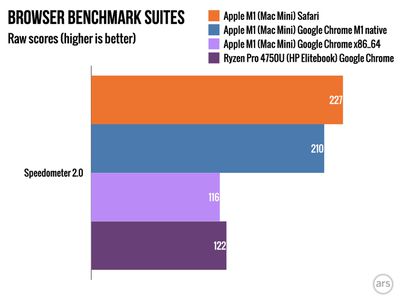 Following the release of the ‌M1‌ version of Chrome, Ars Technica did a series of benchmarks using Speedometer 2.0, JetStream2, and Motion Mark 1.1, and in all cases, the ‌M1‌ Chrome was much faster than the x86 version.

Across all tests, the native ‌M1‌ version of Chrome performed between 66 and 81 percent better than the version of Chrome running through Rosetta 2. Safari was the fastest browser of all, of course, having been designed by Apple, and it came out on top across all of the tests.

According to Ars Technica, the Speedometer test best mimics real life usage and that's where the greatest advantage between the two browser versions was seen. Jetstream 2 best mimics web applications such as spreadsheets, and MotionMark 1.1 measures complex graphic animation techniques.

The ‌M1‌ version of Chrome can be downloaded on ‌M1‌ Macs on the Chrome website by selecting the "Mac with Apple Chip" option after clicking download.

xxray
Yay, Google can track my data faster than ever before!
Score: 32 Votes (Like | Disagree)

Serban55
This mac M chips are a true revolution in tech industry, after the iphone
Score: 19 Votes (Like | Disagree)

arn
So this primarily shows how much speed improvement native code will get you. Doesn’t say anything about M1 vs intel. It’s more native vs Rosetta.
Score: 15 Votes (Like | Disagree)

(Or Brave is something is broken in Safari)
Score: 10 Votes (Like | Disagree)

Thursday July 30, 2020 12:01 pm PDT by Juli Clover
Google today rolled out a new feature for iPhone users who are signed up to beta test Chrome, allowing passwords saved in Chrome to be used in other apps on the device. Chrome passwords can be accessed on iPhone by going to the Passwords & Accounts section, choosing Autofill Passwords, and then selecting the Chrome option. With this feature enabled, Chrome will function as a password...
Read Full Article • 39 comments

Thursday February 11, 2021 1:30 pm PST by Juli Clover
Google is testing a new feature for its Google Chrome app for iOS, which will let Incognito tabs be locked with either Face ID or Touch ID on an iPhone or iPad. As highlighted by 9to5Google, the latest Chrome beta will blur Incognito tabs in the Chrome app until confirmed with the iPhone's biometric authentication. The feature can be enabled by going to Settings > Privacy > Lock Incognito ...
Read Full Article • 27 comments

Monday May 10, 2021 1:14 pm PDT by Juli Clover
Google today introduced Chrome 90 for iPhones, iPads, and the iPod touch, adding support for new Search and Dino widgets on devices running a version of iOS 14. There are three separate Chrome widgets available. There's a two tile search interface that lets you conduct a quick search with quick access to voice search and incognito mode, a single tile search widget, and a shortcut to play the ...
Read Full Article • 44 comments

Monday February 1, 2021 1:04 am PST by Tim Hardwick
Apple has released an iCloud password extension for Google's Chrome browser on Windows that allows iCloud Keychain passwords to be used on PCs. Called simply "iCloud Passwords," the extension allows users to access passwords in Google Chrome that have been generated in Apple's Safari browser. It also enables iCloud syncing of passwords generated in Chrome, making them available on Apple...
Read Full Article • 123 comments