In an internal document obtained by MacRumors, Apple has acknowledged an issue with some iPhone 12 displays exhibiting flickering, a green or gray glow, or other unintended lighting variations under some conditions. 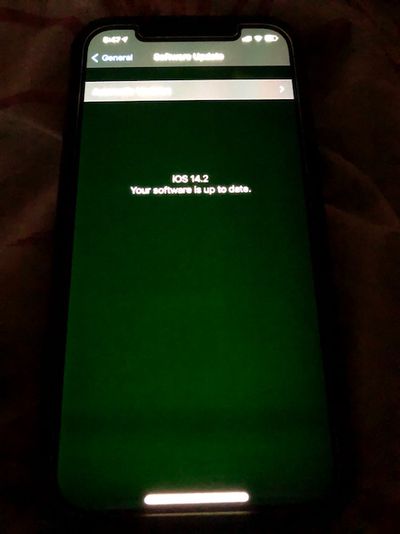 In the document, shared with Apple Authorized Service Providers this week, Apple says that it is aware of customer reports related to this issue and is investigating. Apple has advised technicians to avoid servicing affected iPhones, at least for now, and instead inform customers that they should keep their iPhone up to date with the latest iOS version. This guidance suggests that Apple may be confident that it can fix the issue in a future software update.

A similar green tinted display issue affected some iPhone 11, iPhone 11 Pro, and iPhone 11 Pro Max models, and Apple was able to fix it in iOS 13.6.1.

There have been complaints about this new issue in the MacRumors forums and Apple Support Communities since shortly after iPhone 12 models launched. The issue can affect the iPhone 12 mini, iPhone 12, iPhone 12 Pro, and iPhone 12 Pro Max.

Based on customer reports, the issue appears to occur when the display brightness is set to around 90% or lower. Many users are experiencing the issue on iOS 14.1, iOS 14.2, and seemingly even the first two iOS 14.3 betas. The flickering or glowing is not always persistent, disappearing after a short time for some customers.

If and when the issue is addressed, or we learn more, we'll update this article accordingly.

Does this include the yellow tint issue?

It's obviously a combination of the yellow tint issue, and the blue tint issue.
Score: 26 Votes (Like | Disagree)

moabal
Does this include the yellow tint issue?
Score: 11 Votes (Like | Disagree)

zorinlynx
Is it me or has this release been unusually problematic? Compared to the near flawless release of the 11 series last year it's kind of disappointing.

So glad I'm skipping this year.
Score: 8 Votes (Like | Disagree)

Guessing you haven't seen the 80 page thread regarding the yellow screen issues, pretty sure everyone by now knows how to turn off True Tone.
Score: 8 Votes (Like | Disagree)

LFC2020
Nice work Macrumors, now can we get a news article about the yellow tinting on most displays, greys look yellow/green in dark mode.
Score: 8 Votes (Like | Disagree)
Read All Comments