Today is the official launch day of Apple's new M1-powered Macs, and as customers who pre-ordered await their devices, Apple has also started in-store sales for the new MacBook Air, 13-inch MacBook Pro, and Mac mini. 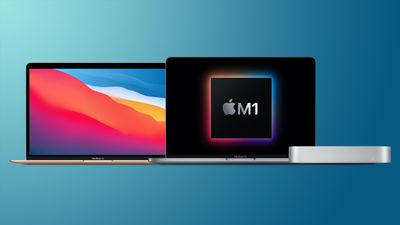 Customers across the United States, Canada, Europe, Asia, Australia, and other regions can now place an order on Apple's website or in the Apple Store app and arrange for in-store pickup at a local retail location.

For example, a quick spot check on the U.K. Apple online store suggests that most stores in England, Wales, Scotland, and Northern Ireland have available stock for customers today or tomorrow. The same goes for other stores in the United States, Canada, and European countries where in-store pickup is available, including Spain, Germany, Italy, and the Netherlands.

In many cases, orders placed today for shipping to the home won't arrive until November 25 at the earliest, although there are likely to be exceptions depending on location. In-store pickup at U.S. stores is expected to become available later today.

The ‌M1‌ Macs are even faster in single-core performance when emulating x86 under Rosetta 2, and as for GPU performance, the integrated graphics outperform the Nvidia GeForce GTX 1050 Ti and AMD Radeon RX 560.

This article has been updated to reflect that ‌Apple Store‌ pickup has expanded to more countries, including the United States and Canada.

Because 8Gb is enough for you, others can't have 16?

The statement I responded to was that people shouldn't buy an 8GiB machine.

Don't put words into my mouth or spin what I write.
Score: 12 Votes (Like | Disagree)

mpe
No 16GB configs for pickup though. Honestly, no one should be buying 8GB.
Score: 5 Votes (Like | Disagree)

LFC2020
Got my base model MacBook Pro this morning in Australia, beast of a machine, you guys are in for a treat.

Crackin machine, this will be!

No 16GB configs for pickup though. Honestly, no one should be buying 8GB.

I thought this, but honestly 8GB for me should be fine for the short term until they release a redesign.

Was thinking the same... and then i thought... why not just wait for the redesign ;)
Score: 4 Votes (Like | Disagree)
Read All Comments