Nanoleaf, the company that makes wall-mounted modular light panels in various shapes, today announced the launch of a line of "Essentials," which includes a new light bulb and lightstrip. 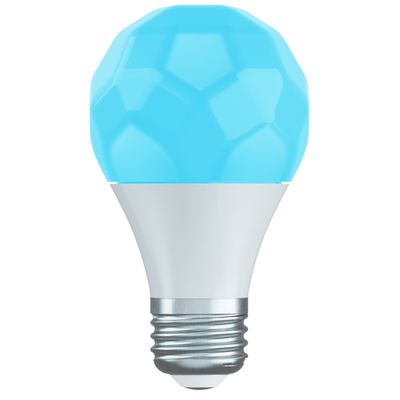 The Smart Color Changing LED Bulb and LED Lightstrip are simpler, everyday lighting options that are meant to be used alongside the light panels. Compatible with HomeKit, both the bulb and the lightstrip have support for ‌HomeKit‌ Adaptive Lighting, which allows them to shift color temperatures during the day.

Cooler lighting temperatures that better match daylight are used during the day, and at night, the lights will cut down on blue lighting to allow for better sleep. The Essentials Bulb, which has a unique shape, supports color temperatures from 2,700 to 6,500K and feature an average brightness of 806 lumens with a max brightness of 1,100 lumens.

The Lightstrip has four white LEDs per LED set, two warm and two cool, and there are 21 LED sets per meter. The Lightstrip measures in at 80 inches and can be augmented with 40 inch expansion strips. Lightstrips can be cut as needed and can reach a maximum of 10 meters with brightness between 2,000 and 2,200 lumens.

According to Nanoleaf, the Essentials are the first smart lighting product to work with Thread, which is a low latency and low power mesh network. With Thread support, users can count on improved connectivity, a wider control range, and an option for setting custom schedules.

Nanoleaf plans to add smart features and integrations in future updates such as Color Scenes, Screen Mirror, and Rhythm Music Sync, which will be made available through the Thread support. No hub is required for Nanoleaf's products, which will connect to ‌HomeKit‌ over Bluetooth.

DarkCole
No hub required, and cheaper than Phillips Hue. I'm curious how well these work.
Score: 9 Votes (Like | Disagree)

procrastinasn
Seems like a much cheaper alternative to Phillips stuff from a reputable company. More competition the better!
Score: 7 Votes (Like | Disagree)

LLL1424
This will force Phillips to low the prices down if the bulbs prove to be equivalent or better.
Score: 4 Votes (Like | Disagree)

freedman
Just received a Nanoleaf essentials bulb on friday. I have a number of Hue and Lifx bulbs already deployed around my house and am interested in cheaper alternatives. Based on a few days of use, I can offer the following assessment:

Cons
• deep colors are much dimmer than with a similar Hue/Lifx bulb
• color/brightness adjustments via Home app and native Nanoleaf app can lag - sometimes it's almost instantaneous but other times it can take up to 5 seconds or not process at all.
• bulb sometimes sporadically switches to white when I'm navigating through various portions of the color palate (reds/purples) and won't allow the selected color to display.

The bottom line is that the bulb does not offer the same brightness with respect to non-white colors and seems to have some connectivity/responsiveness issues when compared to a Lifx/Hue bulb placed in the exact same location. Wondering if this would change if I deploy some Thread-enabled devices. Even so, it's only $20.

Hoping that there is a way for me to tune the system to get better responsiveness.
Score: 3 Votes (Like | Disagree)

And to think that I just spent $45 on a Philips Hue bulb.

Don’t worry, you get what you pay for. I’ve got about 8 hue bulbs and two lightstrips, none have ever gone bad. My friend has 1st gen bulbs and they are all still working. They are quality bulbs
Score: 2 Votes (Like | Disagree)
Read All Comments

Wednesday May 5, 2021 3:50 am PDT by Tim Hardwick
A new study looking at the effects of low-light functions on smartphone users' sleeping habits suggests that features like Apple's Night Shift mode don't actually improve sleep at all. Introduced in iOS 9, Night Shift is designed to cut down on the amount of blue light that an iOS device puts out during the evening hours. The feature uses the clock and geolocation of an iPhone or iPad to...
Read Full Article • 101 comments

Tuesday May 25, 2021 11:11 am PDT by Juli Clover
Eero today released an iOS app update that includes new firmware for its Eero 6 and Pro 6 routers, introducing HomeKit support. HomeKit support for the Eero 6 allows the routers to be managed through the Home app on iPhone, iPad, and Mac. In the Home app, there are options to define how routers are able to communicate within the home and via the internet. With HomeKit integration, Eero...
Read Full Article • 66 comments

Thursday October 15, 2020 10:30 am PDT by Juli Clover
Nanoleaf today introduced the newest lights in its Shapes lighting panel lineup, debuting the Shapes Triangles and the Shapes Mini Triangles, which are interoperable with one another and the Nanoleaf Hexagon panels that launched earlier this year. The new Shapes Triangles are Nanoleaf's second triangle-shaped product and are a followup to the original Nanoleaf Light Panels that were triangle ...
Read Full Article • 25 comments

Monday January 24, 2022 9:20 am PST by Juli Clover
AT&T today announced the launch of upgraded AT&T Fiber plans, which support speeds of up to 5 Gigabits for some customers. There are two separate plans, one "2 GIG" plan and one "5 GIG" plan, available to new and existing AT&T Fiber subscribers. According to AT&T, the new plans are available to nearly 5.2 million customers across 70 metro areas including Los Angeles, Atlanta, Chicago, San...
Read Full Article • 198 comments

Monday January 24, 2022 7:12 am PST by Sami Fathi
Three months after their launch, the 14-inch and 16-inch MacBook Pros continue to experience high demand and seemingly short supply, with shipping dates for both models stretching into multiple weeks in several of Apple's key markets. In the United States, the baseline 14-inch MacBook Pro with the M1 Pro chip is estimated to ship in three to four weeks, promising an arrival by at least...
Read Full Article • 167 comments