Nanoleaf today introduced the newest lights in its Shapes lighting panel lineup, debuting the Shapes Triangles and the Shapes Mini Triangles, which are interoperable with one another and the Nanoleaf Hexagon panels that launched earlier this year. 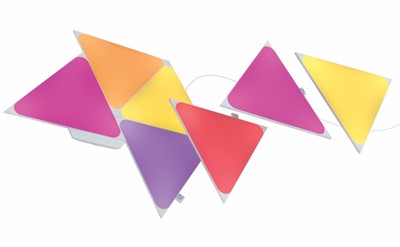 The new Shapes Triangles are Nanoleaf's second triangle-shaped product and are a followup to the original Nanoleaf Light Panels that were triangle shaped. These new panels are an upgrade over the original and are not compatible with the original triangles. Nanoleaf says that the new Triangles have feature slightly rounded and smaller corners.

"Nanoleaf's vision for the Shapes Line is to give users the complete design freedom to create their most personal lighting experience yet. Smart lighting is about pushing the boundaries of possibility and that is exactly what we wanted to offer with our Shapes Line," says Gimmy Chu, CEO and Co-Founder of Nanoleaf. "With the addition of Triangles and Mini Triangles, we're allowing users to explore and combine lighting shapes like never before. Bringing together smart technology and thoughtful design, the Shapes Line leads the Smart Decor category for a lighting experience that truly has no limits."

The Mini Triangles can be used alone and are sold in a standalone set, marking Nanoleaf's smallest lighting solution to date. The standard Triangle panels can also be used on their own, or combined with the mini version.

Nanoleaf offers a LayoutDetect feature that optimizes how the panels are lit, along with pre-programmed scenes that can mirror nature or paint the room in a rainbow of light. Triangles and Mini Triangles have the same feature set as other products like Rhythm Music Sync, which allows them to light up based on the music that's playing in the room.

With the Hexagons, Nanoleaf introduced a new snap-on mounting system for easier installation and redesign, which is also used by the Triangles and Mini Triangles. Alongside the launch of the new light panels, Nanoleaf will be debuting an app update that includes a new color picker and a more intuitive interface that allows for access to a wider range of colors and palettes.

In the future, Nanoleaf plans to introduce an "Essentials" line that's equipped with smart bulbs and light strips. The bulb has a multi-faceted design while the light strip will offer multiple colors, with both controllable through the Nanoleaf app.

Who buys this crap? Looks awful!

Attirex
Will look sweet in my dorm! #brolife
Score: 2 Votes (Like | Disagree)
Read All Comments

Wednesday March 3, 2021 3:04 am PST by Tim Hardwick
Apple is expected to launch a sixth-generation iPad mini in the first half of 2021, possibly as soon as this March, based on long-standing rumors. However, a new rumor out of Asia that has gained traction in the last 24 hours suggests an "iPad mini Pro" will arrive in the second half of this year. According to a post on Korean blog Naver, whose rumor track record is unknown, the device...
Read Full Article • 85 comments

Tuesday April 20, 2021 12:54 pm PDT by Juli Clover
In addition to overhauling the iMac lineup with new M1 iMac options, Apple today quietly added a new feature to the Mac mini. Mac mini buyers can now opt to add a 10 Gigabit Ethernet port to the device for a $100 add-on. When the Mac mini launched, there was a Gigabit Ethernet option, but no upgrade to 10 Gigabit available. There was, however, a sign that 10 Gigabit Ethernet was coming. Ma...
Read Full Article • 67 comments