Rumors have suggested Apple's upcoming AirTags Bluetooth item trackers will come with various accessories to allow them to be attached to items, and now an alleged AirTag keychain has surfaced on Twitter. 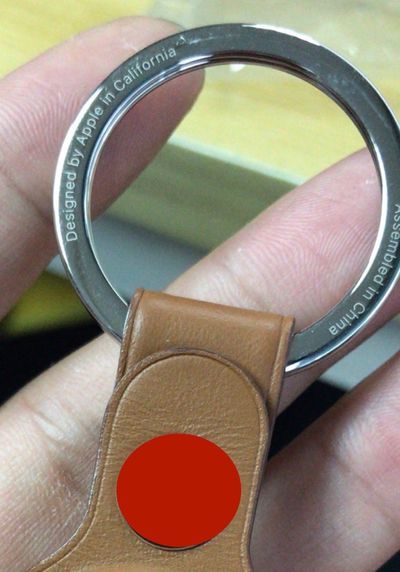 Leaker Fudge (@choco_bit) shared what might be an AirTag carrying accessory in a Saddle Brown color.

A patent for an 'AirTag' accessory
As Fudge points out, the design of the ring is similar to what's been seen in an AirTag patent, but it is something that's easy to fake and therefore the legitimacy of the accessory in the photo cannot be confirmed. Fudge suggests taking the leak with a "bit of salt" because it's easy to reproduce, but if legitimate, this could be our first look at an AirTag accessory.

Another AirTag accessory patent image
‌AirTags‌ themselves are believed to be small, round discs that can be attached to items to allow those items to be tracked in the Find My app right alongside iPhones, iPads, Macs, and other Apple devices.

A rendering of what ‌AirTags‌ could look like
There have been a lot of mixed rumors on when ‌AirTags‌ first launched, and there's still no clear word on when we might see them. It's possible ‌AirTags‌ will make an appearance at the November event, but it may not be likely given the event's expected Mac focus.

Instead, Apple could hold ‌AirTags‌ until sometime in 2021. For more on what to expect when Apple launches ‌AirTags‌, check out our guide.

farewelwilliams
can it find where AirPower went tho?
Score: 42 Votes (Like | Disagree)

carrrrrlos
Perfect xmas gift for that not to tech saavy “I'm not cheating’” partner.
Score: 32 Votes (Like | Disagree)

I can finally track my cat, two dogs, and turtle.
Score: 30 Votes (Like | Disagree)

Perfect xmas gift for that not to tech saavy “I'm not cheating’” partner.

If you feel a need to do something like that, then the game is already over. Save your money (or airtag) for something else (like your faithful 4-legged friend).
Score: 14 Votes (Like | Disagree)
Read All Comments