Mann focused on some of the biggest camera upgrades with the ‌iPhone 12‌ Pro, including the upgraded Wide lens, Ultra Wide Night mode, and LiDAR autofocus, across a range of conditions and environments. 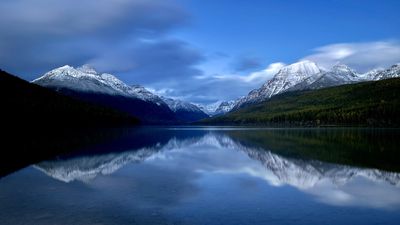 The upgraded 26mm Wide angle lens with a f/1.6 aperture performed better in low light, according to Mann. In a 30-second exposure shot with almost no visible light (above), he found that Night mode and the Wide lens worked extremely well together.

When investigating the new seven-element Wide lens for better edge-to-edge sharpness, Mann shot images with lots of detail in the corners of the frame, but did not see better results than on the iPhone 11 Pro.

He found that the low-light improvements to the Ultra Wide also made indoors photography with the lens much more viable and crisp.

Mann found that the LiDAR Scanner significantly improved low-light portraits, with the focus locking to the subject's face and creating an accurate depth map where needed.

Elsewhere, Mann praised a range of minor software improvements. In particular, he appreciated that it is now possible to lock exposure adjustment without it reverting to auto mode every time a picture is captured or when switching between lenses. This allows the ‌iPhone 12‌ Pro to behave much more like a manual camera.

That night mode portrait shot does not look good.

If it was taken without the flash, it's an insane achievement.
Score: 35 Votes (Like | Disagree)

Almost any phone could have taken those photos

Almost any phone would have produced a black mess.
Score: 27 Votes (Like | Disagree)

That night mode portrait shot does not look good.

You do know that that picture is shot in pitch black night.
Score: 21 Votes (Like | Disagree)

JUiCEJamie
The difference between the 11 Pro and 12 Pro is night and day.
Score: 19 Votes (Like | Disagree)

You do know that that picture is shot in pitch black night.

In his article he explained a bit more. While it would be an insane achievement, as I posted earlier, for this to be a straight portrait night mode shot, it's still impressive. On a tripod it would have been even better. The camera system, as a whole, in the iPhone 12 Pro, seems to be doing some amazing things.

I like to push my gear to the extremes… and knowing others would likely be testing Night mode in urban environments with some available light, I decided to really push the capabilities of Night mode portraits. I shot this portrait of Esther about forty-five minutes after sundown, and it was overcast, so there was very little available light. (To give you an idea, we had to use a flashlight to see our path.)

This Portrait mode w/ Night mode 3-second exposure was shot with the iPhone 12 Pro in my right hand. Simultaneously, in my left hand, I held my iPhone 11 Pro and used the light emitting from the screen (not the flash) as an off-camera fill light for Esther’s face.
Score: 15 Votes (Like | Disagree)

TheBeck
These are beautiful pictures. Sadly I’ll have the same 5 views from my office window to showcase when I get mine. ?
Score: 14 Votes (Like | Disagree)
Read All Comments

Wednesday March 3, 2021 6:34 am PST by Sami Fathi
The iPhone 13 Pro and Pro Max, expected later this year, will feature an improved ultra-wide lens with the additions of sensor-shift image stabilization and autofocus, according to sources cited by DigiTimes. The iPhone 12 Pro features standard dual optical image stabilization for the Wide and Telephoto lens. On the other hand, the iPhone 12 Pro Max is the first iPhone to include...
Read Full Article • 64 comments

Friday October 30, 2020 2:29 pm PDT by Juli Clover
For those still trying to make a decision between an iPhone 12 or an iPhone 12 Pro, we picked up both models and in our latest YouTube video, did a hands-on comparison between them. Our video highlights the similarities and the differences so you can which one is the best fit for you and whether the iPhone 12 Pro is worth an extra $200. Subscribe to the MacRumors YouTube channel for more ...
Read Full Article • 96 comments

Wednesday June 2, 2021 6:26 am PDT by Mitchel Broussard
Nomad today launched a new case for the iPhone 12, called the "Rugged Case for Moment" and priced at $59.95. This accessory is compatible with Moment's M-Series lenses, like the Wide 18mm lens or Tele 58mm lens. The new Nomad case is compatible with Apple MagSafe and is made of Horween leather, available in Rustic Brown and Black. A Moment M-Series Lens is not included, but the case does...
Read Full Article • 9 comments