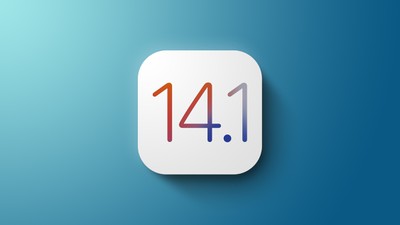 The iOS 14.1 update can be downloaded for free and it is available on all eligible devices over-the-air in the Settings app. To access the new software, go to Settings > General > Software Update.

According to Apple's release notes, iOS 14.1 introduces a number of bug fixes. It addresses a major problem that caused some emails to be sent from the wrong alias, a fix that Mail app users will be happy to see. It also fixes an issue that could cause widgets and icons to show up in the wrong size, and it addresses a bug with the Calculator app that could prevent zeroes from appearing.

The update also adds support for 10-bit HDR video playback and editing in Photos on the iPhone 8 and later, and improves compatibility with Ubiquiti wireless access points.

iOS 14.1 is expected to be installed on the iPhone 12 and 12 Pro that are coming out this Friday. Apple is also testing an iOS 14.2 update and has seeded three betas of the iOS 14.2 update to developers.

otternonsense
I don't get it, why doesn't Apple let us download an OTA update via LTE already, and keeps it mandatory to wifi?!?

My LTE is way faster and more reliable than most wifi in Germany.
Score: 20 Votes (Like | Disagree)

madmin
Thanks and praise to all those early installers who provide feedback to us more cautious macrumors readers
Score: 14 Votes (Like | Disagree)

arefbe
Isn't it time for someone to ask how battery life is already?;)
Score: 9 Votes (Like | Disagree)

MacBird
The release notes don't even mention the issues with the Fitness app. Hard to believe that they have been ignoring these problems for so long.
Score: 7 Votes (Like | Disagree)

I don't get it, why doesn't Apple let us download an OTA update via LTE already, and keeps it mandatory to wifi?!?

My LTE is way faster and more reliable than most wifi in Germany.

Could quite likely be based on agreements with carriers who don't want to have a lot of bandwidth taken up around the same time by many devices downloading larger updates.

Michael Scrip
This is a big day for updates!