HomePod Mini Cable is Non-Detachable, Ends With USB-C Connector for Use With Included 20W Power Adapter

While not detailed in the tech specs, MacRumors can confirm that Apple's new HomePod mini features a non-detachable power cable that ends with a USB-C connector for use with the 20W power adapter included in the box. 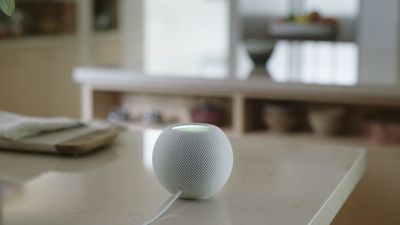 With the switch to USB-C, the ‌HomePod mini‌ could potentially be powered by a wider range of devices and peripherals, ranging from MacBooks to USB-C battery packs with enough wattage, but this will ultimately depend on how much power the ‌HomePod mini‌ draws.

The standard HomePod also has a non-detachable power cable, but it terminates with a plug for direct connection to a wall outlet.

The standard ‌HomePod‌'s power cable ends with a plug (via iFixit)
It's worth noting that soon after the original ‌HomePod‌ launched, it was discovered that the power cable can technically be removed if enough force is applied, so time will tell if this is possible with the ‌HomePod mini‌ too. In an internal document obtained by MacRumors in 2018, Apple warned that the ‌HomePod‌'s power cable should not be removed, noting that this could cause damage to the cable or internal components.

Introduced at Apple's event earlier this week, the ‌HomePod mini‌ has a more compact, spherical design, standing just 3.3 inches tall. However, despite being much smaller, Apple says the ‌HomePod mini‌ still delivers "amazing sound" using "computational audio," a feature that is powered by the same S5 chip as in the Apple Watch Series 5.

‌HomePod mini‌ will be available in white and space gray for $99, with pre-orders set to begin Friday, November 6 at 5:00 a.m. Pacific Time in the United States, Australia, Canada, France, Germany, Hong Kong, India, Japan, Spain, and the United Kingdom.

yaxomoxay
As the owner of FIVE cats, the cable is in trouble.
Score: 45 Votes (Like | Disagree)

farewelwilliams
they should have made the top panel a Qi charger.

better yet, a MagSafe charger and just pass through the controls to the iPhone screen
Score: 41 Votes (Like | Disagree)

Why would you need it detachable?

So that you can replace the cable if it breaks. Also allows you to use cables of more convenient lengths, etc.
Score: 39 Votes (Like | Disagree)

WannaGoMac
Let me get this straight, Apple includes a charger with this but not with the expensive iphones. Hmm, I thought Apple was trying to save the environment by not shipping wall chargers since we all have so many of them?
Score: 28 Votes (Like | Disagree)

Braderunner
Wonder why they are including a power adapter. Everybody has so many extras laying around already. :rolleyes:
Score: 23 Votes (Like | Disagree)

Why would you need it detachable?

Apple is known for high quality cables that last the lifetime of the device.
Score: 22 Votes (Like | Disagree)
Read All Comments

Saturday May 21, 2022 9:00 am PDT by Hartley Charlton
With around four months to go before Apple is expected to unveil the iPhone 14 lineup, the overwhelming majority of rumors related to the new devices so far have focused on the iPhone 14 Pro, rather than the standard iPhone 14 – leading to questions about how different the iPhone 14 will actually be from its predecessor, the iPhone 13. The iPhone 14 Pro and iPhone 14 Pro Max are expected...
Read Full Article • 252 comments