Apple today seeded the tenth beta of an upcoming macOS Big Sur update to developers for testing purposes, two weeks after releasing the ninth beta and nearly four months after the new update was unveiled at the Worldwide Developers Conference. 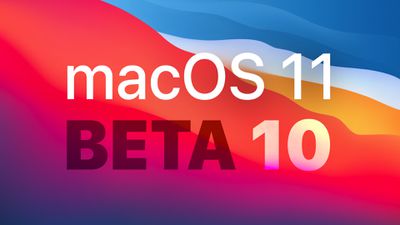 Update October 15: The update has also been released to members of the public beta program.

How far out do you think the GM is? I'm surprised that GM didn't drop yesterday.

I expect the GM to drop in November when they announce the new Apple Silicon Macs
Score: 25 Votes (Like | Disagree)

How far out do you think the GM is? I'm surprised that GM didn't drop yesterday.

over the last few years they have not released a GM Just A GM candidate with still showed beta. I am not one for second guessing apple I'd rather carry on with BETA's till they ge it right Not work to a time table
Score: 12 Votes (Like | Disagree)


Or are these from last version?

WaruiKoohii
This all looks new. I don't recall "On Hold", or "Will be charged by", or a "Charge to Full Now" option. Previously it would just hold at 80% and say Not Charging.

And based on the last beta's, this one will introduce a whole bunch of new ones.


I've tested each year, and many years they were dreadful where popular apps didn't work at all or major functionality broke which was aweful (but of course to be expected for a beta). Where this year it's been insanely reliable with the few bugs I've run into and reported have mostly all been cosmetic. Apple gets yelled out from both ends. If they focus some years just on bug fixes and reliability improvements, everyone says apple is doomed, and is boring and can't innovate, etc. On years they focus on new features, people say they shouldn't focus on new stuff until they fix what's broken. So no matter some people will never be happier, but for the rest of us, pretty happy with the balance of new features and bug fixes. Though some ui glitches or little bugs that sometimes I see don't get fixed for several years which is frustrating but I also understand there are probably a million small little things and they have to prioritize.
Score: 7 Votes (Like | Disagree)

JuanArreguin
Can anyone else confirm this is New? I haven't seen this before.