After it was reported last week that Apple's T2 Security Chip could be vulnerable to jailbreaking, the team behind the exploit have released an extensive report and demonstration. 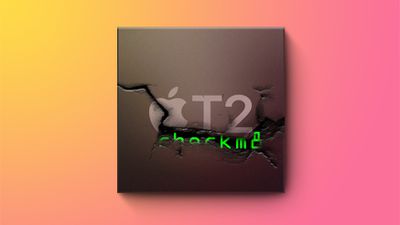 Apple's custom-silicon T2 co-processor is present in newer Macs and handles encrypted storage and secure boot capabilities, as well as several other controller features. It appears that since the chip is based on an Apple A10 processor, it is vulnerable to the same "checkm8" exploit that has been used to jailbreak iOS devices.

The vulnerability allows for the hijacking of the T2's boot process to gain access to the hardware. Normally the T2 chip exits with a fatal error if it is in Device Firmware Update (DFU) mode and it detects a decryption call, but by using another vulnerability developed by team Pangu, it is possible for a hacker to circumvent this check and gain access to the T2 chip.

Once access is gained, the hacker has full root access and kernel execution privileges, although they cannot directly decrypt files stored using FileVault 2 encryption. However, because the T2 chip manages keyboard access, the hacker could inject a keylogger and steal the password used for decryption. It can also bypass the remote Activation Lock used by services such as MDM and Find My. A firmware password does not prevent this since it too requires keyboard access, which requires the T2 chip to run first.

The exploit can be achieved without user interaction and simply requires a modified USB-C cable to be inserted. By creating a specialized device "about the size of a power charger," an attacker can place a T2 chip into DFU mode, run the "checkra1n" exploit, upload a key logger, and capture all keys. macOS can be left unaltered by the jailbreak, but all keys can still be logged on Mac laptops. This is because MacBook keyboards are directly connected to the T2 and passed through to macOS.

A practical demonstration shows checkra1n being run over USB-C from a host device. The targeted Mac simply displays a black screen while the connected computer confirms that the exploit was successful.

These cables function by allowing access to special debug pins within a USB-C port for the CPU and other chips that are usually only used by Apple.

Apple has not fixed the security flaw and it appears to be unpatchable. For security purposes, the T2's SepOS custom operating system is stored directly in the chip's SEPROM, but this also prevents the exploit from being patched by Apple via a software update.

In the meantime, users can protect themselves from the exploit by keeping their Macs physically secure and avoiding the insertion of untrusted USB-C cables and devices.

So much for a chip that's supposed to be all about security.

We all know the first priority was thwarting third party repair attempts. Working at the Genius Bar, the T2 chip was the biggest pain in my ass.
Score: 35 Votes (Like | Disagree)

otternonsense
So much for a chip that's supposed to be all about security.
Score: 27 Votes (Like | Disagree)

And what are we gonna do until then? If this is an unfixable, unpatchable possible exploit, isn't it grounds for a mass product recall?

How do you pull mass product recall out of an exploit that needs direct access to the hardware? There will always be exploits in hardware and software. Next up you'll be calling for a class action nonsense.
Score: 13 Votes (Like | Disagree)

djcerla
There’s no such thing as a “secure” chip.

With enough time and effort, everything is hackable.
Score: 10 Votes (Like | Disagree)

There’s no such thing as a “secure” chip.

With enough time and effort, everything is hackable.

In cryptography secure system does not mean unhackable. It means the time needed to hack it is reasonably high (e.g. millions of years).
Score: 9 Votes (Like | Disagree)

Apple Silicon Macs will not need T2 (or T3) chips because it will be presumably built in to the apple chips.

And what are we gonna do until then? If this is an unfixable, unpatchable possible exploit, isn't it grounds for a mass product recall?
Score: 8 Votes (Like | Disagree)
Read All Comments

Wednesday December 1, 2021 8:26 am PST by Mitchel Broussard
Nomad today announced a pair of new products, including a new USB-C PD wall charger and new Sport Cables. These accessories are both available to order and ship out today on Nomad's website. The 30W USB-C GaN AC Adapter is a small, minimalist wall charger with a 30W power output that supports iPhone fast charging. This accessory costs $29.95 and does not come with a USB-C cable. In terms of...
Read Full Article • 27 comments