Microsoft this week began testing mouse and trackpad support in the latest beta versions of its Word and Excel apps for iPad. The functionality was introduced in version 2.42 of each app, available through Apple's beta testing service TestFlight. 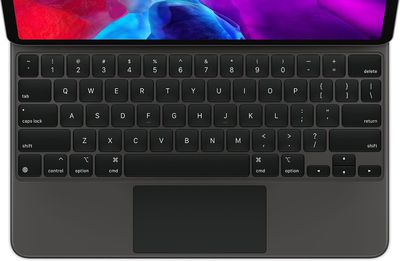 Mouse and trackpad support provides rich visual feedback when editing documents or spreadsheets. When using a trackpad, the cursor displays as a circle on the screen, popping up only when you have a finger on the trackpad. The circle then morphs into various other shapes when hovering over app icons, text fields, or other on-screen elements.

iPadOS 13.4 introduced trackpad and mouse support on all iPad Pro models, the iPad Air 2 and later, the fifth-generation iPad and later, and the iPad mini 4 and later. Keyboards with built-in trackpads include Apple's Magic Keyboard, Brydge's Pro+ for the iPad Pro, Logitech's Combo for the 10.2-inch iPad and the 10.5-inch iPad Air, and more.

Microsoft previously said that mouse and trackpad support in the Word, Excel, and PowerPoint apps will be made available to all users at some point this fall.

Powermax
I am still waiting for Pause/Play with the Spacebar in the YouTube App.
Score: 8 Votes (Like | Disagree)

What? Trackpad for iOS/iPad OS was released just recently.

I'm still waiting for the day when I can advance slides in Powerpoint on iOS with a keyboard like on a Mac or PC.

This is already possible with the current app and it has been possible for a long time.

I am actually waiting for full-fledged versions of the Apps, iPad Pro is particularly powerful enough to run the entire suite smoothly, Excel for iPad is pretty much a file viewer, no where near the desktop app I use daily and rely so much on. PowerPoint is better featured but it is still missing so much. Word can get the job done, but still not ideal.
Score: 7 Votes (Like | Disagree)

Aluminum213
Please take your time Microsoft, I know you’re a small company with limited resources. Don’t stress yourself too much
Score: 6 Votes (Like | Disagree)

I am actually waiting for full-fledged versions of the Apps, iPad Pro is particularly powerful enough to run the entire suite smoothly, Excel for iPad is pretty much a file viewer, no where near the desktop app I use daily and rely so much on. PowerPoint is better featured but it is still missing so much. Word can get the job done, but still not ideal.

I travel for work and carry both my iPad Pro and MBP with me. I would love to leave my MBP at home but the fact is, I need it because the iPadOS Office apps only get me 80% to completing my work. Even on Word, I can't get the job done without needing 3 other apps and switching back and forth, it's just not worth it.
Score: 5 Votes (Like | Disagree)

Can we just make a touch screen MacBook already. All of this just seems to be beating around the bush.

Adding touchpad support to the iPad somehow equals beating around the bush for a touchscreen MacBook? If anything it shows that Apple shouldn’t use a touchscreen in the MacBook..
Score: 4 Votes (Like | Disagree)

Adding touchpad support to the iPad somehow equals beating around the bush for a touchscreen MacBook? If anything it shows that Apple shouldn’t use a touchscreen in the MacBook..

Why? I don't follow your logic here. Why does an iPad with touchpad support have anything to do with whether a MacBook would or would not benefit from a touch screen? Serious question. I get that iOS has been designed from ground up to be a touch screen, and a MacBook would not be as good of one, but that doesn't mean it would be bad with one.
Score: 3 Votes (Like | Disagree)
Read All Comments

Wednesday February 17, 2021 1:39 pm PST by Juli Clover
Brydge today announced the upcoming launch of a new beta firmware update designed for the Pro+ keyboards, which launched last spring. The Pro+ keyboards feature integrated trackpads and came out ahead of when Apple added dedicated trackpad support to iPadOS. The software available from Brydge adds native multi-touch capabilities and should much improve the trackpad experience of the Pro+...
Read Full Article • 24 comments

Tuesday April 20, 2021 10:59 am PDT by Tim Hardwick
As part of its new iPad Pro unveiling, Apple today also announced the availability of the Magic Keyboard in a new white color. Apple in the spring of 2020 unveiled and released the Magic Keyboard for iPad Pro, which is similar to a Smart Keyboard for iPad but with a built-in trackpad for better navigation with a cursor. The only color it originally came in was black, but Apple is now...
Read Full Article • 72 comments

Tuesday January 12, 2021 1:04 am PST by Tim Hardwick
Microsoft today released updates to its suite of Office apps for iPad, including Word, PowerPoint, and Excel. Notably, Excel for ‌iPad‌ now supports Split View, which allows you to open two spreadsheets simultaneously side-by-side to view and edit. Word and PowerPoint received support for Split View in May 2020. Split View can be accessed by touching and holding on a spreadsheet document ...
Read Full Article • 36 comments

Wednesday August 12, 2020 9:45 am PDT by Juli Clover
Tweetbot, a popular alternative to the Twitter app, was today updated to version 5.2 on iPhone and iPad, an update that adds trackpad support and a few other features. With trackpad support, Tweetbot is compatible with iPad cases like the Magic Keyboard or the Folio Touch from Logitech, or standalone mice and trackpad options. Many of the trackpad features worked before, but with the update,...
Read Full Article • 29 comments

Monday October 26, 2020 12:11 pm PDT by Juli Clover
Microsoft today announced that the Word, PowerPoint, and Excel apps for iPad are receiving updates that will allow them to use the trackpad and mouse support in iPadOS. The apps will feature a cursor that transforms into the tool that's needed depending on the context of what you're pointing to for easy cursor control, fluid navigation, and precise adjustments. Microsoft says that the...
Read Full Article • 51 comments