Apple today released updates for Final Cut Pro X, iMovie, Motion, and Compressor, introducing a handful of bug fixes to address issues that have popped up since the last major update. 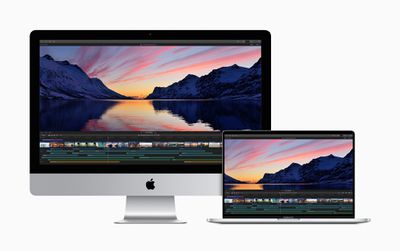 The iMovie update fixes an issue that prevented the sharing of some projects in HD or 4K resolutions and it improves stability when importing media.

For Motion and Compressor, there's a fix for a bug that could cause XAVC media from the Sony PXW-FX9 camera to not be recognized.

Lounge vibes 05
Dang, I forgot iMovie existed.
I remember when Apple used to take time out of their keynotes to brag about iLife, and how easy it is. Now it’s barely mentioned anymore.
Score: 3 Votes (Like | Disagree)

Greenmeenie
When will Apple come out with an iPad pro version of Final Cut?! The 3rd party app Lumafusion is a fully featured video editing app for the iPad that blows away iMovie. Surely the iPad Pro is worthy of a Pro video editing app from Apple!
Score: 2 Votes (Like | Disagree)

I’m surprise that iMovie still exists. I’m surprised they haven’t just taken final cut, and turned it into a monthly subscription. $9.99 a month or something like that

e1me5
GG Apple for fixing this so fast. I wonder if the FX9 needs a firmware update as well.
On a side note, FCPX timeline scrolling is not smooth anymore, the rubber banding effect seems to be buggy.
Score: 1 Votes (Like | Disagree)

Boutsik
Do we know what the Update Number is? I can't find it anywhere.
Score: 1 Votes (Like | Disagree)

maverick28
I sense intrigue: Final Cut PRO runs on Mojave and newer, while a consumer-grade iMovie requires Catalina and newer. Unless Apple hasn't screwed up badly they don't issue updates for D-1 release where D is a current one following the established pratices, got it. Must've been in pain and torturous insecurity while making a decision before being forced to release the 10th iteration for FCP 10.4 and 7th for Catalina (they were so happy doing with only 5 of those and willing to forget the days of eighth, ninth and eleventh! The first slip was in 2016 with El Capitan and now this again! Damned reality. Gotta be careful in the future)
Score: 1 Votes (Like | Disagree)
Read All Comments

Tuesday February 1, 2022 1:18 pm PST by Juli Clover
Apple today released watchOS 8.4.1, a minor update to the watchOS 8 operating system that launched in September. watchOS 8.4.1 comes a week after the release of watchOS 8.4, an update that added a fix for an ongoing charging issue. ‌‌watchOS ‌8.4.1 can be downloaded for free through the dedicated Apple Watch app on the iPhone by going to General > Software Update. To install the new...
Read Full Article • 53 comments