Linksys today announced that its line of Linksys Velop Tri-Band mesh routers are now compatible with HomeKit, making good on a promise to introduce ‌HomeKit‌ support.

Unfortunately, support is being implemented on a rolling basis. A limited number of Velop Tri-Band users in the U.S. will be able to update their routers to add ‌HomeKit‌ support through a free firmware update made available in the Velop app for iOS and iPadOS. 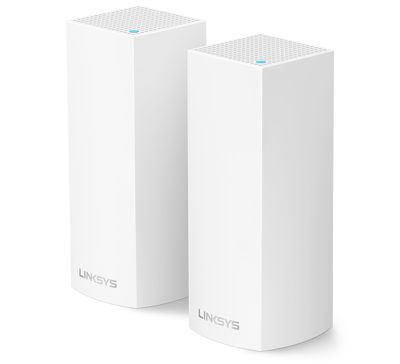 After the initial launch, a phased rollout will continue to bring ‌HomeKit‌ support to other users in the United States along with those in other countries.

With ‌HomeKit‌ integration, Linksys Velop routers will be able to be managed through the Home app on the iPhone, iPad, and Mac, providing secure access to HomeKit-enabled accessories. There are options to define how each accessory is able to communicate within the home and through the internet.

Through ‌HomeKit‌, Velop users can choose to firewall off ‌HomeKit‌ accessories to prevent them from communicating with other WiFi devices on a home network and untrusted internet services to prevent hacking attempts and provide better security for connected home devices.

Linksys has been working on ‌HomeKit‌ support for some time. Back in February, the company mistakenly updated its website with information suggesting the ‌HomeKit‌ update would roll out in the near future, but Linksys later clarified that the launch timing was inaccurate.

Ugh I have WiFi 6 as my main nodes with a few tri-band nodes to cover some dead spots. I'm surprised they haven't been working on HomeKit for their WiFi 6 line - then again WiFi 6 is still "early" for the general consumer. Since I have Velop tri-band nodes that will get the firmware update, I wonder how this will work as my WiFi 6 nodes are acting as my main system.

As for the other comments on systems:

I used Apple routers for years, holding on to 5-6 last gen AirPort Extreme Base Stations for as long as I could. After Apple announced they were dropping their Airport line (which still baffles me as Apple pushes further into IoT support and streaming services, I don't know why they simply didn't update to mesh systems or at least buy out a company and focus on their wireless systems - even adding wifi to the Apple TV and/or HomePod would be perfect). I tested every system you could possibly think of as I had time and didn't want to invest in something that would end up not being up to par, bricked/ruined with firmware updates as Netgear's systems, etc. From Ubiquiti Systems (AmpliFi HD to UniFi Pro), Netgear Orbi, Eero, to Linksys Velop Tri-Band (at the time Apple's only approved systems sold via Apple). Handsdown, the Linksys velop's won every time (using fiber optic gig). I read too many forums with owners of Netgear's Orbi having continuous problems after numerous firmware updates. AmpliFi HD was the only other system I was considering but Linksys nodes have ethernet for a backhaul and I wasn't crazy about plugin nodes.

I haven't owned a Linksys product since the 90's so I was VERY cautious. In fact, I was surprised to learn Belkin now owns Linksys. I'm also surprised more people don't seem to give the Velop's a chance. I know I know, everyone's mile varies. Just thought I'd lend some help.

Figures AmpliFi would get into the WiFi 6 market now after I went with Linksys although I have no regrets. Honestly, try the Linksys WiFi 6. Best Buy has them on sale for $599.99. I grabbed them last year when I saw them for $499.99 and they're compatible with my Velop Tri-band nodes.

Darth Tulhu
I thought this was a white XBox at first...
Score: 8 Votes (Like | Disagree)

I thought this was a white XBox at first...

I thought the Xbox was a black Linksys router the first time I saw it. ?
Score: 6 Votes (Like | Disagree)

thanks for the detailed write up. I feel like my expectations are very similar to yours - where I value stability above everything else. I was actually in the market to replace my google wifi and my main factors are stability and the ability to do wired backhaul. I really need to be able to access through a web ui as well..

The ethernet backhaul was one of the deciding factors in going with Linksys Velop. My Stateside home has roughly 6000 sq ft and a thought I had a few dead spots running three tri-band nodes. In actuality it was one August Smartlock and Connect that I thought wasn't getting enough signal but ended up being a defective Connect that was replaced. Last year, I decided to try out the WiFi 6 system instead of buying more tri-band nodes as they're compatible and simply swapped the main tri-band node with one of the two wifi 6 nodes (also like the ethernet ports in the wifi 6 system - wish they would add more ethernet ports to their Velop systems but I get it, they want to keep them as small as possible - the wifi 6 nodes are about twice the size but not much larger than an AirPort Extreme Base Station and have a USB port with 4 Ethernet ports in addition to the main Ethernet port for the modem). It's been perfect. Haven't had any issues or need to restart the system since. The only issue I had was the app as it lacked a few things and I used the web portal and logged in via Safari for port forwarding, etc. However, they've since revamped it and I haven't had the need to use a web browser. They even improved the UI/graphics so it's much more in-line with what you would expect for such a product line.

I made use of BestBuy and other company return policies when testing out systems. Only the AmpliFi HD was one I couldn't return as it had a 14-day return window and I wanted at least 21 days or more of testing (sold it online for what I paid for it). BestBuy has 30 days, 90 days for Elite, etc members which made it much easier to test systems.

Maconplasma
I just spent 4 weeks working on upgrading my Comcast plan to 1Gbps and shopping for modems and routers. It came down to the Linksys Velop and the Netgear Orbi Wifi6 RBK852. The Orbi won hands down. Faster Wifi, more than twice the direct ethernet connection speed and no dead zones. The Linksys Velop doesn't have great coverage. I wish the Homekit was offered for the Orbi. It's the superior system.
And yes while it looks "cool" it does resemble the Xbox Series X. lol.
Score: 3 Votes (Like | Disagree)
Read All Comments