Apple's Macs and iPads continue to have the highest satisfaction score among PC and tablet makers in 2020, according to new data shared today by the American Customer Satisfaction Index. 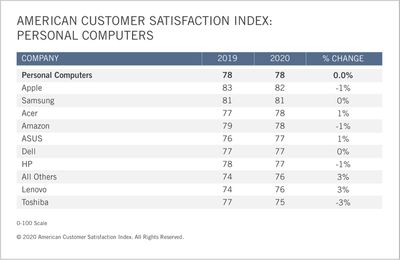 The score includes laptops, tablets, and desktop machines, but when splitting them out, Samsung and Apple are tied for customer satisfaction when it comes to tablets, according to the ACSI. Apple and Samsung also dominate laptop rankings, while there are narrower margins for desktop machines.

Both Apple and Samsung have shown high and stable customer satisfaction for the past five years--separated by just a point in all but one of those years. Apple continues to beat the field across the entire customer experience, receiving its highest mark for design. Samsung shines when it comes to value, rating best in class among all PC makers.

To create its scoring system and compile device scores, the ACSI uses data from interviews with 14,698 customers to analyze customer satisfaction with personal computers, computer software, household appliances, TVs, and more. Customers surveyed were asked to evaluate their experiences with recently purchased products of the largest manufacturers.

JoelTheSuperior
I reckon these statistics are skewed by iPad users. The iPad is a genuinely fantastic tablet and I wholeheartedly recommend them, but my Mac using friends are increasingly frustrated with the experience.
Score: 13 Votes (Like | Disagree)

I reckon these statistics are skewed by iPad users. The iPad is a genuinely fantastic tablet and I wholeheartedly recommend them, but my Mac using friends are increasingly frustrated with the experience.

I don’t disagree. But a day or two a year on a Windows machine is enough to snap me back into reality. The grass on the other side of the fence is only spray-painted greener.

Being the designated family computer nerd is no bed of roses...
Score: 10 Votes (Like | Disagree)

There seems to be a gap between what is being said in some threads regarding the way Apple is handling the Macs and the reported satisfaction of the ACSI. Either some of the issues are overblown or the ACSI proprietary algorithms didn't quite hit the nail on the head with the overall score.

The former I imagine based on how dramatic people on here can be.
Score: 6 Votes (Like | Disagree)

I7guy
There seems to be a gap between what is being said in some threads regarding the way Apple is handling the Macs and the reported satisfaction of the ACSI. Either some of the issues are overblown or the ACSI proprietary algorithms didn't quite hit the nail on the head with the overall score.
Score: 4 Votes (Like | Disagree)

I don’t disagree. But a day or two a year on a Windows machine is enough to snap me back into reality. The grass on the other side of the fence is only spray-painted greener.

Being the designated family computer nerd is no bed of roses...

Man isn’t this the truth. I’ll take Catalina even over having to maintain a Windows PC any day.
Score: 4 Votes (Like | Disagree)

Digital Dude
Apple has done a good job of indoctrinating younger Apple consumers to a different level of quality and service. There was a time when the Apple logo represented the pinnacle of both.
Score: 3 Votes (Like | Disagree)
Read All Comments

Wednesday September 15, 2021 8:00 pm PDT by Eric Slivka
Earlier today, we reported on a Geekbench Metal result for the iPhone 13 Pro showing an approximately 55% graphics performance improvement compared to the iPhone 12 Pro. Since that time, additional Geekbench results for both CPU and GPU performance across the iPhone 13 lineup have surfaced to provide a more complete look at the improvements. On the graphics side, a Metal result for the...
Read Full Article • 206 comments

Tuesday February 8, 2022 9:53 am PST by Juli Clover
Apple TV+ movie "CODA" has been nominated for a best picture Oscar, marking Apple's first nomination in that category. Released last year, "CODA" is a coming of age drama about a hearing child of a deaf family. "CODA" stars Emilia Jones as Ruby, who is responsible for helping her family with its fishing business in addition to pursuing singing at the Berklee College of Music. Ruby is torn...
Read Full Article • 31 comments