Apple's Macs and iPads had the highest customer satisfaction score among PC and tablet makers in 2019, according to new data released today by the American Customer Satisfaction Index. 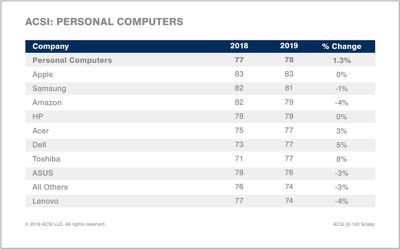 In the overall industry rankings, Apple stays on top for a second year with a stable and high ACSI score of 83, and its customers have by far the highest expectations. Despite a 1% downturn, Samsung keeps second place at 81 and no longer ties with Amazon, which falls much further. Amazon tumbles 4% to 79, just a point above the industry average. Among the three leaders, Apple demonstrates an advantage across all aspects of the customer experience, but it still lags both Samsung and Amazon for value.

The ACSI says that Samsung is the "industry leader" when it comes to the desktop segment with Apple in second place, but Apple devices win out when it comes to laptops and tablets, earning it the top overall score.

As with last year, Apple earned best-in-class ratings for everything from device design to features and available apps. Apple, says ACSI, demonstrates an advantage "across all aspects of the customer experience."

To create its scoring system and compile device scores, the ACSI uses data from interviews with approximately 300,000 customers to analyze customer satisfaction with hundreds of companies across dozens of industries.

newyorksole
That’s funny. According to comments on forums and social media, Apple is overpriced, non-innovative garbage. Apparently Samsung and Google offer a lot more than Apple does or ever could.

Something isn’t adding up. Oh well.
Score: 16 Votes (Like | Disagree)

That’s funny. According to comments on forums and social media, Apple is overpriced, non-innovative garbage. Apparently Samsung and Google offer a lot more than Apple does or ever could.

Something isn’t adding up. Oh well.

Well, the masses have voted with their wallets.

While a small but vocal minority bash Apple online, the rest do what really counts - buy the products which work best for them, and there you have it.
Score: 10 Votes (Like | Disagree)

Would that somehow retroactively make him know what it was before today? Would his comment be less true had he searched it before posting?
Score: 5 Votes (Like | Disagree)

Baymowe335
I thought Apple made underpowered, overpriced junk and iPads couldn’t do anything with a mobile OS?

This is more evidence that a vocal minority doesn’t speak the truth.
Score: 3 Votes (Like | Disagree)

djcerla
As an Apple user since 1995 I would go 100% Apple for everything from cars to TVs should they enter those markets. Everything works together well, no frictions.

That’s funny. According to comments on forums and social media, Apple is overpriced, non-innovative garbage. Apparently Samsung and Google offer a lot more than Apple does or ever could.

Something isn’t adding up. Oh well.