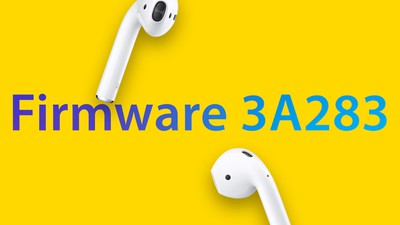 Apple does not provide details on what's included in refreshed firmware so we don't know what's included, but we are awaiting new firmware to support iOS 14 features such as automatic device switching and spatial audio for the ‌AirPods Pro‌.

You can check your ‌‌AirPods‌ or ‌AirPods Pro‌‌ firmware by following these steps:

It has been several months since Apple released new firmware updates for the ‌AirPods‌ and the ‌AirPods Pro‌.

‌‌‌AirPods Pro‌‌‌ firmware updates often include performance improvements, bug fixes, and feature tweaks, and if we find notable changes after the firmware updates are installed, we'll add new details to this article.

Wow! It's weird I tested it with the TV series "For all ManKind" and it makes it feel like the sound is coming from my ipad. I even took off airpods to make sure they were connected cause the sound feels like it's being projected from the ipad. Wow trippy!

Highly subjective opinion, but the ANC feels stronger after the new FW update.

It won’t come with this.. the update required for spatial audio will be a hardware update ( all current hardware updates for AirPods Pro are 1.0.0.0) (I think that’s the amount of zeros lol) this is a software update

ClockWork72
Just put my pro's on the charger and I have the update now.

Just put my pro's on the charger and I have the update now.

Wednesday March 10, 2021 5:52 am PST by Mitchel Broussard
Woot today reintroduced its popular sale on Apple's AirPods Pro, marking down the headphones to $189.99, from $249.00. Last month we saw the AirPods Pro drop to around $179 on Amazon, but sales like that have been rare, while Woot's has been the most consistent around online in early 2021. Note: MacRumors is an affiliate partner with some of these vendors. When you click a link and make a...
Read Full Article • 11 comments