Apple has today launched an official "Oprah's Book Club" podcast, to accompany the Apple TV+ series of the same name (via The Hollywood Reporter).

Apple's ongoing partnership with Oprah Winfrey has now expanded into podcasting. Over a series of eight episodes, Oprah will discuss Isabel Wilkerson's book "Caste: The Origins of our Discontents."

The non-fiction book, published at the start of August, illustrates "the hidden hierarchy of human ranking that has shaped America." It was lauded soon after on The New York Times bestsellers list. Winfrey said the book "provides a new way of seeing racial inequality, giving rise to countless aha moments and helping us truly understand America as it is now and how we hope it will be."

The podcast will revolve around discussions with a group of guests as they explore the "eight pillars of caste" laid out in the book. Two episodes will be released each week on Tuesdays and Thursdays. The trailer and first episode of the podcast series is available now.

Earlier this year, it was reported that Apple was planning to develop a range of original podcasts, some of which would focus on ‌Apple TV+‌ titles, in an effort to compete with the likes of Spotify and Amazon.

In May, Apple introduced The Zane Lowe Interview Series, which featured in-depth conversations from the DJ’s ‌Apple Music‌ show, and daily news roundup "Apple News Today." ‌Apple TV+‌ anthology series "Little America" is also due to receive an accompanying podcast at some point in the future.

pweicks
Who cares about Oprah?
Score: 41 Votes (Like | Disagree)

IIGS User
Oprah jumped the shark years ago anyway, but.

The sort of Kafka-esque implicit bias pseudoscience put forward by the likes of Oprah, who is possibly the first "social influencer" long before the term came to be is at best poisonous to corporate entities who's goal is to make a profit, maintain market share, and promote brand. At worst, it's destructive.

A least half of your customer base thinks this is total hogwash. another 1/4 are on the fence, but are afraid to say it because they don't want to draw the ire of the woke crowd, and just want to make their way in a world fraught with challenges and pitfalls.

The other 1/4 are made up partly of true believers, people on the fence, and those who go along with the zeitgeist of the time in their own obtuse circle of agreers.

The same thing is happening with major league sports right now, but I think it's really going to hit home when football starts.

People know the world sucks. They've lived through 2020 and all it's had to offer. They know things aren't perfect. They don't want to PAY to be reminded of the fact. The NFL in particular has gone all in, and from what I can see and hear from my rather passionate football friends, they simply won't watch the games this year. Partly because it's become too preachy. Partly because they've discovered during the pandemic that there are other more fulfilling things to spend their spare time doing.

The shutdown of sports, cinema, theater, and travel forced a lot of people out of their comfort zone in so much as finding a diversion from every day life and a lot of them were all ready to move on. Others are tired of being preached to. Tired of looting, of being told they're racist because they were born with a certain skin color. Tired of being told "silence is violence".

So hey, I like Apple products. The whole Oprach thing is static to me. I like my iPhone and iPad and all that. I'm listening to Apple music as I type this. So I really don't care. I wasn't ever a really big sports fan either, so meh.

But if you're looking for a way to lose money and peeve a lot of your customer base, this is probably the anabolic steroids route to doing that.....
Score: 27 Votes (Like | Disagree)

thadoggfather
She's obsolete. Yet Apple keeps wheeling her out 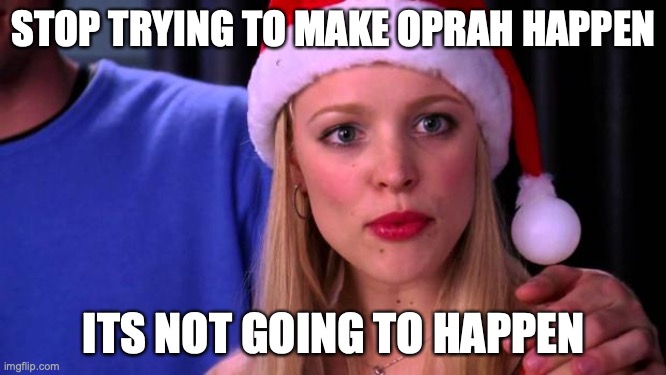 rmoliv
This wasn’t really what I was expecting today. Anyway, not interesting in it nor in anything “Oprah”.
Score: 20 Votes (Like | Disagree)

Who cares about Oprah?