Apple's four-for-one stock split takes effect today, with the company's share price dropping from roughly $500 to around $125 as of the start of trading this morning. 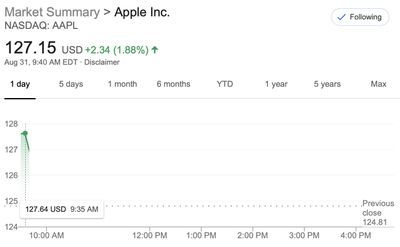 The strong rise in Apple's stock price over the past five months has continued today, with shares trading nearly 3% higher in the first few minutes of trading. Apple shares have pared their gains since then, but are still up around 2% today.

Apple's overall market value of over $2 trillion is unaffected, as investors received three additional shares for every share of Apple stock they previously owned.

It’s literally a no-brainer to buy Apple stock. It’s like a guaranteed success.

Blackstick
Worked at Apple for 7 years... since then, I've been with a public corp that sold itself to go private, but no company has equaled the portfolio performance that Apple stock has given me - paid for almost my entire house in cash because of them.
Score: 12 Votes (Like | Disagree)

magicschoolbus
With all of these new product announcements, 5g iPhones, Apple Silicone, iPad Air..this is a steal of a price.. Apple sales on this new hardware is going to be through the roof..
Score: 5 Votes (Like | Disagree)

What exactly is the point of stock splits in 2020 when we have fractional shares? Wasn't the point of stock splits to make them more affordable so more people could buy them, thus increasing their perceived value and making them a bit more liquid? All of that is kind of no longer relevant with fractional shares that most retail brokerages have adopted. Anyone care to educate me and correct me?

I'm not sure what the new DJIA advisor is after this adjustment, but it's something like .15 (with a bunch of digits after that). Previously Apple's share price represented more than 10% of the DJIA, now it represents around 3%.
Score: 4 Votes (Like | Disagree)
Read All Comments

Monday November 28, 2022 11:00 am PST by Juli Clover
Apple's upcoming iPhone 15 models will be equipped with Sony's newest "state of the art" image sensors, according to a report from Nikkei. Compared to standard sensors, Sony's image sensor doubles the saturation signal in each pixel, allowing it to capture more light to cut down on underexposure and overexposure. Nikkei says that it is able to better photograph a person's face even with...
Read Full Article • 133 comments

Monday November 28, 2022 10:42 am PST by Juli Clover
Apple has cut back on its Twitter advertising, according to Twitter CEO Elon Musk. In a tweet, Musk said that Apple has "mostly stopped" its Twitter ads, asking if Apple hates "free speech." Musk went on to publish a poll asking if Apple should "publish all censorship actions" taken that impact customers and he began retweeting content from companies that Apple has had moderation discussions ...
Read Full Article • 1327 comments