The new game "Samurai Jack: Battle Through Time" has arrived on Apple Arcade. The game is a single-player action platformer based on the Adult Swim series of the same name. 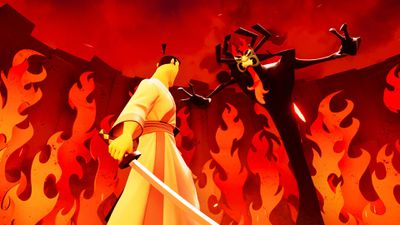 The game takes place during the show's season finale, and involves an alternate timeline where the character of Jack travels through multiple levels on a new quest to defeat his nemesis "Aku". With characters voiced by the original voice-actors from the show, Samurai Jack allows players to explore classic worlds and moments from episodes of the show, and boasts "one of the most unique and iconic gaming experiences available on ‌Apple Arcade‌."

Players will be able to equip and master over a dozen different weapons and increase their power by training to unlock new skills, with opportunities for different play-styles.

"Team up with trusted allies from the show to face off against familiar enemies... Travel to a dark future to free mankind. Dive into the past to face off against diabolical monsters. Seek your fate as you travel across space and time," says the game's description.

Samurai Jack: Battle Through Time is also available on Nintendo Switch, Xbox, Steam, and the Epic Games Store. More games, such as "The Last Campfire" and "World's End Club," are expected to come to ‌‌Apple Arcade‌‌ soon.

69Mustang
It's funny that you guys clown on this game when...

Who would want to play Halo on xcloud when you can play a AAAAAAAAA masterpiece like Samurai Jack?!

it was developed for PC, XBox, Playstation, and Switch. It was only...

Yeah, Apple Arcade is TOTALLY a competitor to xCloud with stuff like this ... ?

later added to Apple Arcade. Even funnier is this game is most likely going to eventually be on XCloud to stream.

So that I'm clear, I'm not defending Apple. I don't even agree with their position on this issue. I am criticizing both of your uninformed opinions based on the inaccurate assumption that this is a title developed for Apple Arcade.
Score: 10 Votes (Like | Disagree)

alex2792
Who would want to play Halo on xcloud when you can play a AAAAAAAAA masterpiece like Samurai Jack?!

Is the name "Samurai Jack" politically appropriate now a days?
;)

Another game made of the same soup... same style, same color and same <insert_here>...
I clearly can recognize the Apple dictatorship footprints.

Uh... bruh? Apple has nothing to do with this game beyond hosting it on Apple Arcade. So I'm not sure what you recognize, but it ain't footprints, at least not Apple's anyway.

On topic: I wonder if Apple had to cough up significant coin to get Adult Swim and Soleil to code this for Apple Arcade. This was originally only scheduled to be released on consoles and PC.
Score: 4 Votes (Like | Disagree)

Another game made of the same soup... same style, same color and same <insert_here>...
I clearly can recognize the Apple dictatorship footprints.

*shrugs. That's Apple's house style. It's there prerogative to choose content and developers that fit with the kind of gaming service they are offering. Which I'd loosely class as 'casual' gaming. Or the kind of 'wide appeal' mainstream/casual gaming style they're after.

Nintendo have a similar 'house style' for a younger to 'casual' gamer. So maybe this is their nearest competitor?

PC games their 'Doom Eternal' soup. (Over and over...BFG...with jumping. We 'get it.' And lifeless mannequins grunting with the constipated voice...)

PS/X Box have their 'style' of games.

For the record, I like the style on this Samurai game. There is an obsession with 'realistic' (or what passes for it...). I find it more interesting that the power of graphics allows different styles of graphics. From cartoony to 'real.'

The more gaming offerings the better. An eventual Apple TV A12 with Apple Arcade will find a home to many a casual gamer. I'd happily go for it. Just games I can 'pick up and play.' (I've a very low patience for games that wander around for hours whilst figuring out the latest bespoke interface. Though I've given 'The Last of US' a go on the PS3. I've got about 15 mins before I start getting bored of it all. As 'impressive' as it is.)

Wildkraut
Another game made of the same soup... same style, same color and same <insert_here>...
I clearly can recognize the Apple dictatorship footprints.
Score: 3 Votes (Like | Disagree)
Read All Comments