Back in 2018, it was revealed that noted YouTuber and former NASA engineer Mark Rober had been quietly working in Apple's special projects group on several projects related to virtual reality.

While Rober has since left his position at Apple, the company has continued to pursue patent applications based on his team's work, and a newly published application today relates to the team's efforts to create VR-based solutions for motion sickness experienced by riders in vehicles. 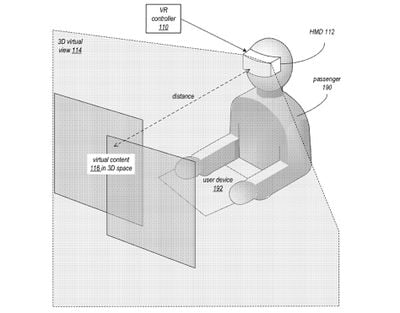 The patent, which is titled "Immersive Virtual Display" and is a continuation of a previously filed one on the same topic, shows that Apple has made some changes to the technical claims of the patent, deleting the original 20 claims and adding 20 new ones in an ongoing attempt to protect the concepts developed by the team.

Apple's patent application describes a VR system for vehicles with multiple uses. Simply, the system would provide virtual views that match visual cues with the physical motions that a passenger experiences. The VR experience would be immersive, replacing the view of the real world with a virtual environment. In addition to the obvious opportunities for entertainment, this virtual environment would be able to adjust in real time to accommodate a passenger suffering from motion sickness.

When this is not possible, the system would augment the simulation of the selected simulated route to ensure that it matches the real-world route. The motions and accelerations of the virtual content would therefore be synchronized with the real-world motions and accelerations of the vehicle. The vehicle itself would require a sensor to be coupled to it to facilitate this.

The filing explains that the vehicle's systems and controls could also be integrated with the VR system to provide physical effects with the virtual experience. The patent makes clear that this would include control of throttle, brakes, suspension, and steering. Furthermore, the fan speed, temperature, and direction of heating and air conditioning could also be changed to provide physical effects to the virtual experience. Plans for the inclusion of sound effects via the car's audio system are also included.

Simulated environments would be stereoscopic to create an illusion of depth, and adjust in real time to provide the illusion of the user moving within the scene. All of this would allow users to feel as if they were physically in a different environment.

The patent specifically outlines how slight changes to perceived motion in the simulated environment that differ from the motions of the real world would treat and prevent motion sickness. For example, visual cues that indicate flow past a passenger may be slowed down or sped up when compared to the actual speed or acceleration of the vehicle to mitigate sickness. In addition to adapting the mapping ratio to help prevent motion sickness, visual, sensory, and audio techniques may be used to increase the comfort passengers suffering from motion sickness.

The filing also refers to a potential mixed reality application of this technology, which may potentially indicate its use in the rumored Apple Glasses product. Alternately, the patent mentions use of this VR system in autonomous vehicles, which could refer to Apple's long-rumored vehicle project.

The patent application says that windows in vehicles are "inherently unsafe and not structurally sound, and add cost to vehicles." Providing a virtual view of the real environment or of a simulated environment would eliminate the need for windows in autonomous vehicles completely. The VR system could also provide passengers with the sensation that they are riding in a larger vehicle than its actual size, which the patent says "may provide passengers with a more pleasant and secure-feeling experience when riding in a small autonomous vehicle."

Apple files dozens of patents application weekly, but patent filings are not always indicative of Apple's immediate plans. Given the complexity and outlandish nature of this filing, it is very unlikely that any of the features outlined in it will come to market any time soon. Nonetheless, it offers insight into Apple's current areas of research and development.

now i see it
so we can all now pretend we're in a Rolls Royce.
Poverty will no longer exist. Just put on this VR headset...

The patent application says that windows in vehicles are "inherently unsafe and not structurally sound, and add cost to vehicles." Providing a virtual view of the real environment or of a simulated environment would eliminate the need for windows in autonomous vehicles completely. The VR system could also provide passengers with the sensation that they are riding in a larger vehicle than its actual size, which the patent says "may provide passengers with a more pleasant and secure-feeling experience when riding in a small autonomous vehicle."

so the key is to replace windows with screens that have a projection of real-world views?

Yeah, it's a bit like robbing a bank wearing a mask made from a photo of your own face.
Score: 3 Votes (Like | Disagree)

magicschoolbus
Can we focus on teleportation instead?
Score: 2 Votes (Like | Disagree)

Huge fan of Mark Rober. The Guy Is incredibly talented and shows angles to theories/experiments that take extensive testing For demonstration purposes.
Score: 1 Votes (Like | Disagree)

Sure as hell isn’t me!
Score: 1 Votes (Like | Disagree)
Read All Comments