England is developing a contact tracing app that uses Apple and Google's Exposure Notification API, and while there are still bugs to be worked out, it's set to be trialed in a few areas in the country starting tomorrow. 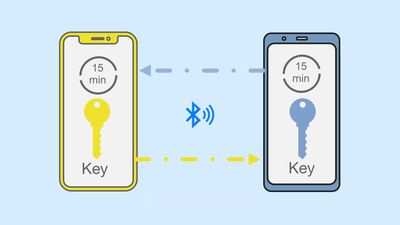 According to the BBC, the app will be trialed on the Isle of Wight and in one other area with a volunteer group. The experiment is being launched quietly as there's no word on when a formal national rollout might happen.

Even as the app enters a trial period, engineers are struggling to address a problem with Bluetooth distance calculations. Apparently the app wrongly flags people of being within 6.6 feet of one another when they're not, which could lead to people quarantining when they don't need to.

Part of the problem with the Apple-Google framework is that the tech firms have decided that developers should not get access to raw attenuation data - a measure of changes in Bluetooth signal strength.

Instead, it provides a more basic set of readings that an app can use to calculate its own risk scores - the idea being that this helps preserve users' anonymity.

But one consequence of this, is that engineers have not been able to take advantage of a technique developed by researchers at the UK's Turing Institute and the University of Oxford. It filters the data to give a better indication of proximity.

England's app engineers are hoping to be able to improve accuracy to a degree that will be usable by the end of the year.

As with other ‌Exposure Notification‌ solutions, the app will use Bluetooth to determine when two people come into contact with one another to track possible coronavirus exposures. If a person is diagnosed with COVID-19, the app allows them to notify all of the people they've been in contact with, cutting down on the spread of the virus.

The app England is developing will also ask users to scan a QR code when entering properties as a way to later alert them if they've visited a location linked to multiple infections.

The UK did not initially plan to use Apple and Google's ‌Exposure Notification‌ API and was instead pursuing a different approach, but a June report suggested the National Health Service had changed its mind and was working on an app using the Apple/Google API.

The original app was hobbled by restrictions that Apple imposes on Bluetooth apps, which would have prevented an app that doesn't use the ‌Exposure Notification‌ API from accessing Bluetooth in the background. Because Bluetooth was not continually available, the app that was initially in development only detected four percent of iPhones in situations where the app was asleep and the two devices involved had not been recently used.

How about this: I don't even want the API on my phone, seriously, this is a dangerous slippery slope to head down, granted I am coming at this from a U.S. perspective, but this is a bad, bad idea that invades privacy in the worst possible way with what will be the worst possible outcomes.

Go read the damn spec ('https://blog.google/documents/73/Exposure_Notification_-_FAQ_v1.1.pdf'). Tell us how the information that is actually collected (not what you fantasize is collected) could possibly be abused. Your fears are paranoia, not based on the actual design.

Carrying your phone around right now, today, with it constantly checking in with the nearest cell towers, is already giving any three-letter agency that’s sufficiently motivated to care about your whereabouts, all sorts of information about where you’ve been and when.
Score: 21 Votes (Like | Disagree)

LV426
Why on Earth can’t someone (e.g. Apple) develop an app that can be used in any country? What does the England app do that is so unique? I live in England but I’m on holiday in Scotland just now. That‘s a spanner in the works.
Score: 7 Votes (Like | Disagree)

How about this: I don't even want the API on my phone, seriously, this is a dangerous slippery slope to head down, granted I am coming at this from a U.S. perspective, but this is a bad, bad idea that invades privacy in the worst possible way with what will be the worst possible outcomes.

The details of the implementation seem to show that there really isn't something that invades privacy. It's also something the can be enabled/disabled by the end user.
Score: 6 Votes (Like | Disagree)

crawfish963
They should have this up and running just in time for this pandemic to be over.
Score: 5 Votes (Like | Disagree)

Why on Earth can’t someone (e.g. Apple) develop an app that can be used in any country? What does the England app do that is so unique? I live in England but I’m on holiday in Scotland just now. That‘s a spanner in the works.

The general idea is we aren’t expecting people to travel to another country during a global pandemic for a holiday that could wait a year. And the API works across apps for those that live and work at borders.
Score: 5 Votes (Like | Disagree)

So, are Wales, Scotland and NI gonna have each a different Exposure App?

Yes. NI already have one on the App Store.