When Apple introduced macOS Big Sur, it ended support for the third-party kernel extensions that previous versions of Parallels were built on. That forced the developers to re-engineer the virtualization software from the ground up, but that challenge has now been officially completed. 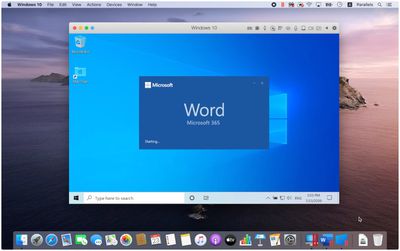 While support for Big Sur is the headline feature, Parallels 16 also comes with several new features and improvements. This version claims to launch twice as fast and offers a 20 percent improvement in DirectX performance, with OpenGL 3 graphics in Windows and Linux also said to be improved.

Virtual machines can now be set to automatically return unused disk space when shutting down, and Windows Travel Mode claims to be able to increase laptop battery by up to 10 percent.

Elsewhere, Pro Edition users can now name their custom networks, and export virtual machines in a compressed format that are a said to be a fraction of their pre-compressed size. Parallels has also launched a plug-in for Microsoft Visual Studio to simplify testing on different operating systems.

Lastly, in addition to all the work that has gone on under the hood to ensure Big Sur compatibility, Parallels 16 also brings a new look to the software that's more in keeping with Apple's redesigned interface in macOS 11.

There's no word at present whether Parallels will run Windows on the forthcoming Apple Silicon Macs that Apple announced at WWDC, but Parallels says it will release further information on this further down the line.


Parallels Desktop 16 requires High Sierra 10.13 or later to run, and can be purchased for a one-off fee of $99.99 for the standard edition, with the more feature-laden Pro and Business editions available at $79.99 per year on a subscription basis.

Users with Parallels Desktop 14 and 15 (including Pro and Business Editions) can upgrade for $49.99, while college students in the United States, Canada, Germany and U.K. have access to the reduced price Student Edition. A 14-day trial of the virtualization suite is also available.

haruhiko
Parallels Inc. has solved the problem with subscription software. You buy the software at full price with full ownership, but you always have to buy a new one every year. Best of both worlds.

LeeW
Every year something is always 20% faster with Parallels :)
Score: 29 Votes (Like | Disagree)

Kylo83
every year when a new macOS comes out they make us pay another 49.99 not fair
Score: 21 Votes (Like | Disagree)

Their pricing model is abhorrent. They charge you twice as much for the "Pro" version to remove completely arbitrary CPU and RAM limits.

Or if you're a developer they charge you twice as much for "Pro" just so you can integrate it with free open-source tools such as Vagrant.

If they actually had a fair pricing model they would get money from me, but as it is I am content virtualising Linux under VirtualBox. The performance difference isn't big enough to justify $100 a year.

every year when a new macOS comes out they make us pay another 49.99 not fair

Do you want new features or not? Do you think these features magically appear, or do you developers need to code them and that these developers want salaries?

If you want something cheaper, take look at VirtualBox. It's really really bad compared to Parallels.
Parallels is a luxury alternative. It's the best but also expensive.
Score: 10 Votes (Like | Disagree)

You do realize Big Sur isn't out, right?
Score: 9 Votes (Like | Disagree)
Read All Comments