Twitter has updated its official iOS app to allow all users to limit who can reply to their tweets. The company has been testing the "conversation participants" feature with select users since May, but it now appears to be ready for a wider rollout. 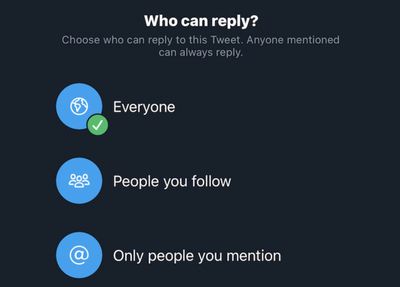 "In May, we tested a new way to have a chat with exactly who you want, so you can create and consume more meaningful changes," reads the update release notes on the App Store. "Now, everyone can try this new feature and choose who can reply to their tweets."

The "everyone" represents how Twitter traditionally works and it's the default setting that's selected for every tweet, while the other two options limit replies. Tweets that have limited replies are labeled and the reply icon is grayed out so it's clear to people that they're unable to reply.

Even when replies are limited to followers or people mentioned in a tweet, people unable to reply will be able to view, Retweet, Retweet with Comment, and like the tweets.

The feature should help cut down on online abuse and harassment, and it could also potentially be used to promote more focused discussions on the social platform with a select few users.

Update: Some users are reporting that the feature is not accessible to them, despite updating the Twitter app to the latest version, suggesting it is still rolling out.

Update 2: Twitter said that the release notes suggesting limited replies to tweets were available to everyone were incorrect. The feature has not rolled out to all users, and it still remains limited to a small number of Twitter users.

Update 3, August 11: As of August 11, the feature that lets Twitter users limit who can reply to their tweets is rolling out to everyone. It's available on Twitter for iOS, Twitter for Android, and Twitter on the web.

DONT AGREE WITH ME? CANT REPLY TO ME. ONLY MY OPINION IS RIGHT!
Score: 41 Votes (Like | Disagree)

macmyworld
Well this takes all the fun out of Twitter. The replies are better than the tweets!
Score: 13 Votes (Like | Disagree)

DONT AGREE WITH ME? CANT REPLY TO ME. ONLY MY OPINION IS RIGHT!

They are literally exacerbating
a serious issue. Imagine someone growing up with this. Heaven forbid they talk to someone in person someday who disagrees with them.
Score: 9 Votes (Like | Disagree)

TrenttonY
This feature should not be allowed for accounts that are blue checked marked.
Score: 7 Votes (Like | Disagree)

decisions
Really can’t help but think this is Twitter’s attempt to double down on their platform being against critical thinking, debate, and discussion in general. It’s more about feeding off the ego boost of of knowing that other people saw your opinion.
Score: 5 Votes (Like | Disagree)

and 1989 others
Twitter, the social media site with a key goal of restricting how social you can be.
Score: 4 Votes (Like | Disagree)
Read All Comments