WhatsApp is rolling out a new way for users to fact-check forwarded messages for misinformation, after several months testing the new feature. 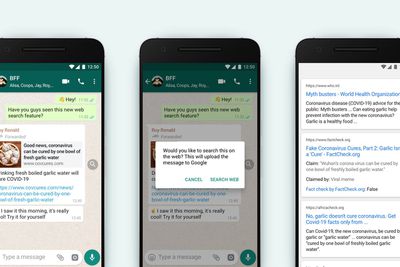 From today, messages that have been forwarded through a chain of five or more people will display a magnifying glass button alongside them in the chat thread.

Users who tap the button will be asked if they want to search the web to try and find news results or other sources of information about the content they have received.

WhatsApp says the feature works by allowing users to upload the message via their browser without WhatsApp ever seeing the message itself.

The ability is being piloted starting today in Brazil, Italy, Ireland, Mexico, Spain, the U.K. and the U.S. for everyone on the latest versions of WhatsApp for Android, iOS and WhatsApp Web.

The feature is the latest in a series of attempts by WhatsApp to slow the spread of misinformation on the chat platform. In April, for example, it imposed new restrictions on the mass forwarding of messages, so that if a user receives a message that has been forwarded more than five times, they will only be able to send it on to a single chat at a time.

The move comes after several hoaxes went viral on the platform, including false stories about the ongoing global pandemic one of which linked the outbreak to the rollout of 5G networks.

cmaus
In my experience, People who blindly believe everything and anything the media puts up, are not interested in facts.

I mean, this is awful. People should be able to critically assess content that’s sent to them ok their own. Letting someone else do it for them is just another sign they can’t think for themselves.

I think every human being is or should be able to think critically on their own.

Otherwise, you are just giving up on sovereignty.
Score: 25 Votes (Like | Disagree)

internetExplorer
But who fact-checks the Fact Checkers?
Score: 17 Votes (Like | Disagree)

More like getting your personal communication editorialized by some propaganda outfit (the failing and dying Snopes, etc.)

We know that snopes will twist a statement in order to debunk something that wasn't actually claimed and often can't be trusted. All the so-called fact checks need to be fact checked themselves. They will twist what they check to make a point.

For example, to pick something that is quite old and hopefully not contentious, snopes "fact checks" the "Claim: Vice-President Al Gore claimed he ‘invented’ the Internet.” which they say is false, and that is true he never used the word "invented" and never said "I invented the internet". By including "invented" vs "created" snopes can label it false.

The actual statement that Gore said is:
“I’ve traveled to every part of this country during the last six years. During my service in the United States Congress, I took the initiative in creating the Internet.” (CNN transcript of discussion on March 9, 1999’s “Late Edition” with Wolf Blitzer, see http://www.cnn.com/ALLPOLITICS/stories/1999/03/09/president.2000/transcript.gore/index.html)

Of course ARPANET, the internet precursor, was created in 1969, and Gore started serving in Congress in 1977.

So while snopes may be fact checking something, one has to be extremely careful in exactly what they are fact checking. Clearly Gore was not "creating the internet" since ARPANET was well before his time. Snopes then goes through a lot of verbiage to explain what they are saying, to enable them to label it false.

Anyone who doesn't fact check the fact checkers is asking to be uninformed.
Score: 12 Votes (Like | Disagree)

Seanm87
In my experience people who believe conspiracy theories aren't interested/care in knowing where it came from.

They tend to be very simple people.
Score: 11 Votes (Like | Disagree)

More like getting your personal communication editorialized by some propaganda outfit (the failing and dying Snopes, etc.)
Score: 9 Votes (Like | Disagree)

But who fact-checks the Fact Checkers?

Ah, now that's the real question. Considering news outlets can be traded and bought by individuals/conglomerates, your question is a great question.
Score: 9 Votes (Like | Disagree)
Read All Comments