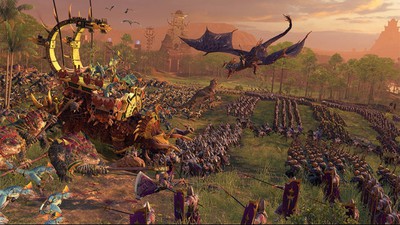 Minimimum system requirements include 2GHz processor, 8GB RAM, 1.5GB of Graphics memory, macOS 10.14 or later and at least 52GB of disk space. Total War: Warhammer II is priced at $44.99 and is available on the ‌Mac App Store‌ from today.

The_Gream
Great addition to the Total War Franchise, but if you plan on buying this, Steam offers both windows and Mac as a bundled deal (buy one and have both systems) - plus you can normally get it on sale if you keep an eye out.
Score: 10 Votes (Like | Disagree)

jlocker
Ahh the days you would walk into egghead software store or Babbage store and get your PC software. When I walk into a Gamestop and look at the tiny PC software section and it brings back memories of days gone bye.
Score: 5 Votes (Like | Disagree)

I wonder are those the same games and will they have the same release patches?

There is no guarantee. Some ported games lack cross-platform multiplayer (especially with Steam) if you buy them in the Mac App Store. I would be careful with Feral Interace and Aspyr for that reason alone. Steam is almost always the better choice, in terms of pricing and features, given that it is most often the platform/web shop of choice for PC game developers, not to mention that you get versions for other platforms (Windows and/or Linux) alongside too.
Score: 1 Votes (Like | Disagree)

Thursday January 21, 2021 3:27 am PST by Tim Hardwick
Apple's first virtual reality headset will be a "pricey, niche precursor" to a more ambitious augmented reality product, according to a new report from Bloomberg's Mark Gurman. As a mostly virtual reality device, it will display an all-encompassing 3-D digital environment for gaming, watching video and communicating. AR functionality, the ability to overlay images and information over a view...
Read Full Article • 69 comments

Friday January 22, 2021 3:34 am PST by Tim Hardwick
Apple is working on a "thinner and lighter" version of the MacBook Air that the company plans to release during the second half of this year at the earliest or in 2022, according to a new report by well-connected Bloomberg journalist Mark Gurman. It will include Apple's MagSafe charging technology and a next-generation version of the company's in-house Mac processors. Apple has discussed...
Read Full Article • 152 comments