Feral Interactive has announced that the first game in the Total War: Warhammer trilogy is set to come to the Mac next week.

Originally developed by Creative Assembly in partnership with Games Workshop and published by SEGA, Feral has completed the work of converting the popular PC title to run via Apple's new graphics API, Metal, and will launch the Mac game on April 18. 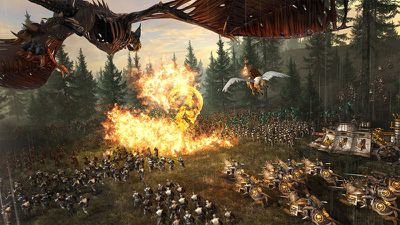 A fantasy strategy game of colossal proportions, Total War: WARHAMMER combines an addictive turn-based campaign of skillful empire-building with explosive real-time battles as players strive to conquer all at the head of one of four mythic Races.

The deep and rich universe of Warhammer opens a new era for Total War by taking the series into a magical realm of grand high fantasy. Gigantic monsters, flying dragons, legendary heroes and regiments of nightmarish warriors all take their place on the bloody battlefields of Warhammer’s Old World.

Gamers get to command one of four races, each with its own radically different play style, units, characteristics and abilities. Players can choose to command the tough and vengeful Dwarfs, the undead Vampire Counts, the valiant men of the Empire, or the barbaric Orcs and Goblins of the Greenskin tribes.


The original Windows title proved a big hit, but some users reported technical glitches that marred their enjoyment of the game, so it remains to be seen whether Feral has managed to overcome those issues in the conversion process.

The Mac version of Total War: Warhammer will be available through the Feral Store, the Mac App Store and Steam from April 18. System requirements have yet to be announced.

Most people don't get Windows PC's to play games either. Howeva, some Win/Mac owners would like to play games on their system of choice. It's good that Feral helps Mac owners achieve that desire.
Score: 5 Votes (Like | Disagree)

PJAckermann
According to Steam, the Mac release was waiting for a Metal update, so it stands to reason that the system requirements at least include Metal compatibility. That would mean nothing before 2012.
https://support.apple.com/en-us/HT205073
Score: 3 Votes (Like | Disagree)

Yeah. You're not supposed to have fun with a Mac.

When I bought my first Mac, it didn't take me long to come to the sad realisation that Macs totally suck for gaming. I solved it by buying an Xbox 360. Now I also have an Xbox One and a PS4 and don't have to care about the gaming capabilities of my computers anymore.
Score: 1 Votes (Like | Disagree)
Read All Comments