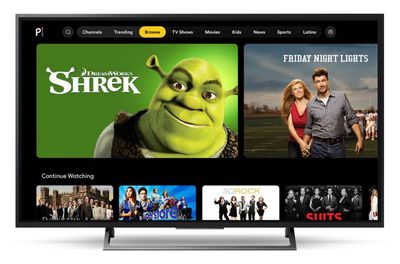 The service, which became available to some Comcast subscribers in April, is now available on iOS and Apple TV, and operates a free tier and a premium tier.

The free tier includes 13,000 hours of programming, while the premium tier costs $4.99 a month and features over 20,000 hours of TV, movies, news, sports and other content produced by NBC Television, NBC News, and Universal.

Both tiers include commercials, but the premium tier runs fewer ads and offers access to new original content, such as the dystopian drama "Brave New World," as well as access to shows the day after they're broadcast on TV. Peacock also offers an ad-free "premium plus" tier that costs $9.99 a month.

The service features NBC shows such as "30 Rock," "Cheers," "Downton Abbey," and "Saturday Night Live," with live sporting events to include four exclusive English Premier League matches on July 15 as well as coverage of the U.S. Open Championship.

Like HBO Max, Peacock is not available on Amazon Fire TV or Roku. According to CNBC, NBCUniversal does not want want Peacock to be included in Amazon Channels, where Amazon would take a cut of new subscriptions and would be the one collecting credit card information and other user data.

As for Roku, NBC Universal was reportedly unable to agree on how much of Peacock's ad inventory the smart TV platform can sell.

That's left the Apple TV set-top box as the main beneficiary, as it gets to add yet another name to its exclusive list of supported streaming services.

enc0re
I have a simple rule: If I’m paying, commercials are not acceptable.
Score: 25 Votes (Like | Disagree)

JBGoode
Another service! This means a ten page thread of people acting as if they're being forced to subscribe. Can't wait.
Score: 15 Votes (Like | Disagree)

Michael Clarke
And with the launch of Peacock, there's finally too many streaming services.
Score: 11 Votes (Like | Disagree)

Another service, they couldn't all just keep their content on Netflix or work together to make a unified platform. Nope, dozen different services and apps each wanting to charge you.

They had that. It was called Hulu.
Score: 10 Votes (Like | Disagree)

Sledneck52
I think there will be backlash because of the name.. protests.. riots.. The bird community will be in an uproar and demand a name change.. ??‍♂️?
Score: 9 Votes (Like | Disagree)

ruka.snow
Another service, they couldn't all just keep their content on Netflix or work together to make a unified platform. Nope, dozen different services and apps each wanting to charge you.
Score: 7 Votes (Like | Disagree)
Read All Comments