Apple's iOS 13.6 update, released today, appears to enable FaceTime in the United Arab Emirates, a country where the ‌FaceTime‌ app was previously unavailable for use. 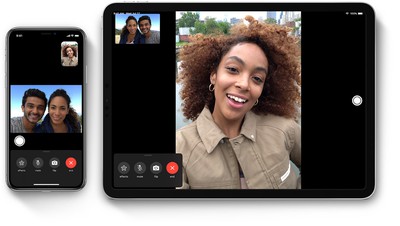 According to MacMagazine and multiple Twitter users, the ‌FaceTime‌ feature is accessible after installing the iOS 13.6 update. Apple did not mention the update in the iOS 13.6 release notes, and support documents haven't been updated as of yet.

Local regulatory rules have blocked ‌FaceTime‌ in the UAE, but rumors over the course of the last few years have suggested that Apple was working with government officials to lift the ban on ‌FaceTime‌.

All phones sold in the United Arab Emirates have ‌FaceTime‌ disabled by default, but installing iOS 13.6 should unlock the feature. There have also been multiple reports that ‌FaceTime‌ is available in the UAE on devices running iOS 14 as well.

‌FaceTime‌ also used to be banned in Saudi Arabia but it became available in the iOS 11.3 update.

Update: MacMagazine, the site that originally reported the changes, now says that for ‌FaceTime‌ to work in the UAE, the iPhone needs to be set to another region. This indicates that ‌FaceTime‌ is not yet officially available in the United Arab Emirates.

Their laws say that only the government-owned telephone monopoly can provide VoIP communications.

Apps like Zoom, WebEx and VoIP features in Teams, Slack, etc. are banned. There is a temporary exemption for these apps due to COVID.

Sounds like they want to be able to spy on all voice communications. Why else would they ban it?
Score: 6 Votes (Like | Disagree)

Why was that not allowed?

Their laws say that only the government-owned telephone monopoly can provide VoIP communications.

Apps like Zoom, WebEx and VoIP features in Teams, Slack, etc. are banned. There is a temporary exemption for these apps due to COVID.
Score: 4 Votes (Like | Disagree)

ukms
Just to update this thread for anyone in this part of the world.

iOS 14 has retained FaceTime on UAE devices. It is still blocked on the telco side intermittently but works perfectly on my own home WiFi setup and outside of the country. Main takeaway is that if you live here you no longer need to buy devices outside the country (or grey imports) if you want FaceTime.

The other UAE related news is that ECG function is now active on UAE devices here as well as other parts of the Middle East.
Score: 3 Votes (Like | Disagree)

Sounds like they want to be able to spy on all voice communications. Why else would they ban it?

Money. The US would likely be the same, had the Bell System monopoly not been broken up.

If it's an issue with spying, then pass laws to require wiretap capabilities. China is big on VoIP apps, like WeChat.
Score: 1 Votes (Like | Disagree)

The world is incredibly messed up.

You live in a country where the government has a monopoly in transporting private correspondence.
Score: 1 Votes (Like | Disagree)
Read All Comments

Monday July 26, 2021 11:35 am PDT by Juli Clover
Apple today updated its Apple at Work website with a new section dedicated to the Mac, which offers up 11 reasons why "Mac means business." On the webpage, Apple highlights the M1 chip as the number one reason why business users should choose a Mac, offering up an M1 overview [PDF] that explains the benefits of the M1 chip. The information isn't new, but it does provide a look at all of...
Read Full Article • 86 comments