Apple is re-closing eight more retail stores across the United States, in the states of Maryland, Missouri, Virginia, and Wisconsin. 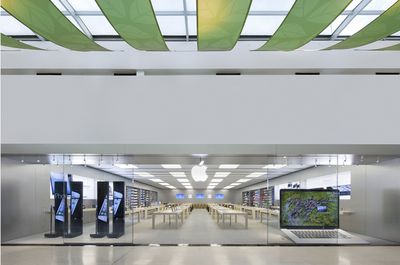 Apple Towson Town, Maryland
According to Michael Steeber on Twitter, the following stores will be closed from today:

Six of the 28 stores in California that have not yet re-closed are also reportedly returning to curbside service. They are Valley Fair and Oakridge in Santa Clara County, North County in San Diego County, Roseville in Place County, Arden Fair in Sacramento County, and Santa Rosa Plaza in Sonoma County.

Steeber notes that all the above California stores are in indoor malls that were forced to close, being located in counties on the state monitoring list.

With coronavirus outbreaks across the United States continuing to spike, Apple has been forced to re-close many retail locations that had previously reopened, with stores in Maryland, Ohio, Tennessee, North Carolina, Florida, and more shuttered at the current time. In these locations, Apple is asking retail employees to work remotely in work from home support roles that the company has been offering since March.

Retail employees are able to serve as support advisors to handle online service requests and questions from customers unable to receive services in store.

How long will this hoax continue? God bless this country!

Craptastic
I live in NYC and I’m just waiting for Cuomo, Murphy, and Lamont to close the tri state area from the rest of this country.

We spent months in quarantine and went through hell being the epicenter back in April. I’ll be damned if I have to go through this all over again because some of the people in this country suck and need to flex their constitutional rights about going out or not wearing a mask.
Score: 17 Votes (Like | Disagree)

dwsolberg
I don't understand why bars are open right now. They are kindling for spreading this virus. We need to be smarter about this. Shut down bars and other places where strangers crowd together indoors for long time periods. That's where the majority of reported spread is happening. Then the rest of the economy can open up and we can get closer to normal. The government needs to support bars and other closed businesses during this time, but if the rest of the economy can open up, it will at least have some tax dollars to keep them afloat.

I feel like everyone wants to argue and assign blame, but we're missing he big picture.
Score: 12 Votes (Like | Disagree)

I don't understand why bars are open right now. They are kindling for spreading this virus. We need to be smarter about this. Shut down bars and other places where strangers crowd together indoors for long time periods. That's where the majority of reported spread is happening. Then the rest of the economy can open up and we can get closer to normal. The government needs to support bars and other closed businesses during this time, but if the rest of the economy can open up, it will at least have some tax dollars to keep them afloat.

I feel like everyone wants to argue and assign blame, but we're missing he big picture.

Take it all in and make your own decision. Slowly state government is opening and we're waiting to see just how long before this takes off and people getting sick. Been working from home for month's, goto the store wear a mask get what I need go home and yes wash my hands. Deal with it or get sick and possibly pass on.

For all the people that think it's a hoax would you goto a hospital and volunteer with OUT protection, how about volunteer at the morgue or where ever there having mass burials and tell the family's of the lost family members it's only a HOAX
Score: 12 Votes (Like | Disagree)

squirrellydw
People are still flying, airlines are adding flights and packing planes, Disney World is open. I just don’t understand why this virus is spreading
Score: 10 Votes (Like | Disagree)
Read All Comments