There's a new 'EvilQuest' Mac ransomware variant that's spreading through pirated Mac apps, according to a new report shared today by Malwarebytes. The new ransomware was found in pirated download for the Little Snitch app found on a Russian forum. 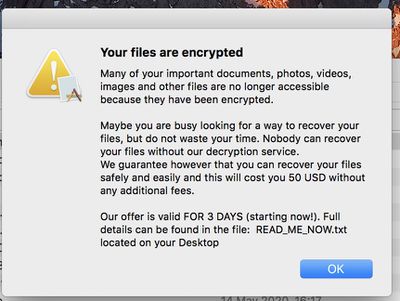 The installation script moves the Patch file into a new location and renames it CrashReporter, a legitimate macOS process, keeping it hidden in Activity Monitor. From there, the Patch file installs itself in several spots on the Mac.

The ransomware encrypts settings and data files on the Mac, like Keychain files, resulting in an error when attempting to access the iCloud Keychain. The Finder also malfunctioned after installation, and there were problems with the dock and other apps.

Malwarebytes found the ransomware to work poorly and was not able to get instructions on paying the ransom, but a screenshot found on the forums where the malicious software originated suggests it's meant to prompt users to pay $50 to recover access to their files. Note: anyone infected with this ransomware or any ransomware should not pay the fee, because it does not remove the malware.

Along with the ransom activity, the malware may also install a keylogger for monitoring keystrokes, but what the malware does with the functionality is unknown. Malwarebytes says that its software for Mac is able to remove the ransomware, detected as Ransom.OSX.EvilQuest. Encrypted files will require a restore from a backup, though.

Similar ransomware was found in other pirated apps, and Mac users can avoid it by staying away from pirated apps and untrustworthy websites and forums that offer illicit downloads.

Apple Macintosh 128K
Stick to legit apps from legit services and you'll be fine. Also keep an eye to make sure the apps are properly signed.

To have this happen you have to bypass macOS security and allow the non-signed installer run. It's like giving the keys to your house to some questionable person on the street and then being surprised when they take your stuff.
Score: 30 Votes (Like | Disagree)

icanhazmac
While more ransomware on Macs is not welcome pirates get what pirates get.
Score: 25 Votes (Like | Disagree)

swm
in any case, if this happens to you, a 2 step procedure will save the day:
- boot into internet recovery (can't be sure if the on-disk recovery data is compromised)
- reinstall from timecapsule
Score: 17 Votes (Like | Disagree)

Not to worry, this is what developers want apparently, rather than paying 30% to Apple.

I'm not sure you understand the situation fully...
Score: 17 Votes (Like | Disagree)

doboy
That's what you get for pirating apps.
Score: 16 Votes (Like | Disagree)

neoelectronaut
No sympathy for anyone that pirates software.
Score: 13 Votes (Like | Disagree)
Read All Comments