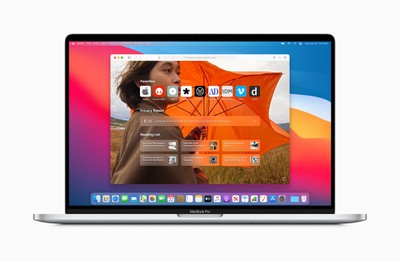 Tabs have been redesigned to make navigating with Safari faster and more powerful by showing more tabs onscreen, displaying favicons by default to easily identify open tabs, and giving users a quick preview of a page by simply hovering over the tab.

A new Privacy Report button in the toolbar gives users insight into how sites are using their connection, and which trackers have been blocked. Users can choose when and which websites a Safari extension can work with, and tools like data breach password monitoring never reveal users' password information.

Extensions support for Safari is adopting new standard, so users can bring over extensions from other browsers. Users can also give extensions access just for a day, on a certain website, or for every website. In addition, the Mac App Store has a new extensions category that includes editorial spotlights and top charts.

Meanwhile, native-translation capabilities are now built into Safari, and the browser can detect and translate entire webpages from seven languages. There's also a customizable Start Page with background image support that extends to Reading List and iCloud Tabs.

Aside from features, Safari is getting faster. Apple says it now loads frequently visited sites an average of 50 percent faster than Chrome.

abrantes09
Im switching... I was looking for a reason and I've been given a reason...this is epic
Score: 4 Votes (Like | Disagree)

The iMac hasn't been redesigned in twelve years and you're talking about updates to Rosetta? ?

One of the interesting things I picked up today watching the video is that Apple seems to have many different people working on many different projects. It doesn't appear, as some think, to be a single group of people working on 1 project at a time. Heck, I wouldn't be surprised if they have an entire department that handles artwork like emojis instead of it just being the developers doing that work. Who can say?

It's entirely possible those two things you mentioned are handled by completely different groups of people. And I would further guess that progress, or lack thereof, on one team probably doesn't affect the progress of the other team in this particular case.

You could literally have said "The iMac hasn't been redesigned in twelve years and you're talking about..." and stuck anything they said there today at the end and it would fit just as well. One has nothing to do with the other.
Score: 3 Votes (Like | Disagree)

Airforcekid
Ill give it a try but I cant imagine it being faster than Brave plus I dont want to lose all my Chrome extensions.
Score: 2 Votes (Like | Disagree)

Dom_
The only question is: will it do VP9? (Either natively or via the new extension functions.)
Score: 2 Votes (Like | Disagree)

velocityg4
If it does indeed get better extension support I may try it out. Maybe this will pry me away from Firefox and Chrome.
Score: 2 Votes (Like | Disagree)

I wish they would bring back Safari for Windows. Apple has to realize that many of us loyal customers also use Windows devices.

Monday June 21, 2021 7:17 am PDT by Hartley Charlton
Users appear to be underwhelmed by Apple's upcoming iOS 15 and iPadOS 15 updates, according to the findings of a new survey by SellCell. The survey asked 3,000 iPhone and iPad users, evenly split between men and women, aged 18 or over in the United States, what they thought of iOS 15, iPadOS 15, and the naming of the upcoming iPhone 13 lineup. Over 50 percent of all of the survey's...
Read Full Article • 289 comments

Monday June 21, 2021 7:07 am PDT by Joe Rossignol
Following widespread reports that the iPhone 12 mini has experienced poor sales performance, at least relative to other iPhone 12 models, Taiwanese research firm TrendForce today claimed that production of the device has already ended. According to TrendForce, the iPhone 12 mini "reached End-of-Life ahead of time" during the second quarter of 2021, suggesting that Apple will focus on selling ...
Read Full Article • 145 comments