Apple is expanding its street mapping efforts beyond vans outfitted with LIDAR equipment and now has employees collecting street level data on foot. 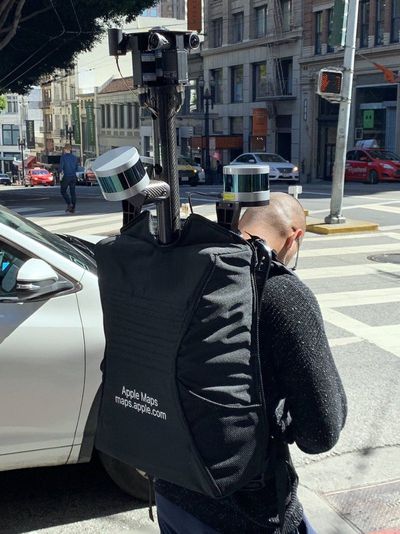 Apple has been collecting street-level data with its Apple Maps vans since 2015, but this is the first time we've seen someone collecting mapping data on foot.

Apple in iOS 12 introduced a revamped Maps app that's been rebuilt from the ground up using its own data, which the company has promised will bring better accuracy and more detail.

The new Maps app offers up improvements to traffic, real-time road conditions, road systems, new construction, and changes in pedestrian walkways along with more detail and accuracy when it comes to displaying foliage like grass and trees, parking lots, building shapes, and more.

Data gathered on foot will likely be used to improve pedestrian directions in major cities like San Francisco.

Apple appears to be bolstering its mapping efforts following the launch of iOS 12. Along with the Apple Maps backpack man, Apple has also deployed new Subaru Impreza mapping vehicles that were spotted with new LIDAR equipment earlier this week in Los Angeles.

neuropsychguy
At least he'll close all his rings on his Apple Watch.
Score: 76 Votes (Like | Disagree)

Scottsoapbox
Or some creeper that just put 'Apple maps' on his weird backpack.
Score: 50 Votes (Like | Disagree)

BootsWalking
He's looking down at his phone to navigate around the city using Google Maps :p
Score: 38 Votes (Like | Disagree)

klydefrogg
Hope the AI is good at identifying and blurring out human poop.
Score: 33 Votes (Like | Disagree)

ronntaylor
I don't know why Apple, Google and others don't equip USPS, UPS, FedEx, etc with LIDAR equipment on their trucks, planes and employees to get the most accurate maps. It could generate money besides improved usage.
Score: 32 Votes (Like | Disagree)

tromboneaholic
At that pace it's going to take a long time to catch up to Street View.
Score: 27 Votes (Like | Disagree)
Read All Comments