Apple has updated its Maps app to include real time transit directions and data for Hong Kong residents. 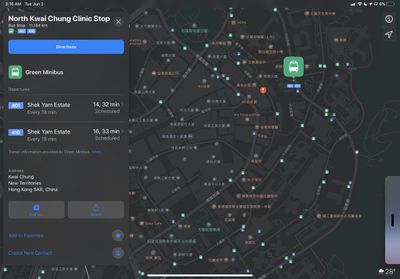 Image credit: @HappyETwmc
From today, local Apple Maps users can search for metro train stations, bus routes and ferry piers, and get real time transit information for services. The only limitation appears to be a lack of indoor station mapping.

The metropolitan area is one location in Asia where hints of transit support surfaced months ago. However, Apple's Hong Kong mapping has been a complicated issue because of the administrative region's self-governance and autonomy disputes with mainland China.

As noted by tech blog Ata Distance, ‌Apple Maps‌ actually uses two different map data sources for Hong Kong – AutoNavi map data for mainland SIM iPhones, and another one for non-mainland SIM iPhones. This led to an unusual situation in which transit directions where available to Chinese visitors but not to residents of Hong Kong.

‌Apple Pay‌ Octopus is similar to ‌Apple Pay‌ Suica with Express Transit – users just hold the top of their iPhone or Apple Watch near an Octopus reader to use, and there's no need to unlock the device or open an app. Even if the device shuts down due to low battery, users can still use Octopus.

Octopus Cards Limited first announced ‌Apple Pay‌ Octopus would be "coming soon" in July 2019, but the launch was pushed back several times, eventually to "later in 2020" without explanation.

I would tell you the answer to that issue, but it's painfully obvious you didn't actually bother to open the linked apple site and look at the solution to this problem. You should!

This is undoubtedly quite a momentous day for you - the first time you've seen a person on the internet make a mistake.

For anyone else who, like me, can't read - you can top up using cash if you don't have a HK debit/credit card.
Score: 4 Votes (Like | Disagree)

Google Maps is utterly useless in Hong Kong too. Especially the walking maps. It ignores any walkway in Central (of which there are many, used buy millions every day!). So to go from say IFC to QRC they route you over a 1.2km detour instead of the 150m direct straight route. Bus stops are often NOT at all where they are and whole bus lines don‘t stop at the stops listed.

Works fine for me. Uses the over pass walkways. ?‍♂️

no one app is going to be perfect, but Apple maps doesn’t even come close for my needs. I’ve never seen a bus or Tram stop out of place and if so it can be reported as such.

i use HKeMobility app or the citybusNWFB For public transport.
Score: 1 Votes (Like | Disagree)

What's the technology for it working if your phone has shut down? When I first read about it, I assumed some sort of NFC thing but iPhone 8 doesn't have NFC.

If you have an iPhone XS or newer it actually still works up to 4 hours after your phone ran out of battery.
Score: 1 Votes (Like | Disagree)

typographer
I liked the way of using octopus cards with my apple watch.
Score: 1 Votes (Like | Disagree)
Read All Comments