FileMaker 19 for macOS Launches With Support for Third-Party Libraries 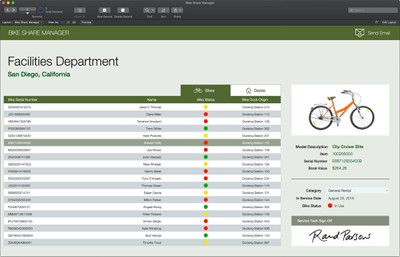 Claris says that with FileMaker 19, developers are able to be more productive and businesses are able to leverage Claris' global community of developers, add-on marketplace, and existing developer resources to collaboratively solve complex digital programs.

FileMaker 19 enables Claris' global developer community to use the platform they already know to deliver powerful custom apps to more than 1.3 million active users faster than ever before. With FileMaker 19, developers can:

Pricing on FileMaker 19 begins at $15 per month per user, and the software can be purchased from the Claris website.

ksgant
Wow...."Filemaker" and "Claris". Now those are two names I haven't heard in a long, long time. Kind of warms the cockles of my heart.
Score: 14 Votes (Like | Disagree)

Boyd01
Also funny that when an update does occur, lots of people who don't use Filemaker show up to bash it.

I don't like the price either - which is why I still use my 10-year-old copy of FileMaker Pro 11. It still runs just fine on Sierra, have not tried it on Mojave but confirmed it won't work on Catalina (no surprise, since it's 32-bit). Anyway, I have certainly gotten my money's worth from FileMaker 11. And I use the same version on two Macs and one Windows computer. The old versions allowed this, but evidently the new ones don't. Not to happy about that.

I started with FileMaker sometime in the early 1990's. In 1993 I built a complex relational database that I used to manage my department's multi-million dollar purchasing, payroll and contracting, which I continued to upgrade until I retired in 2011. We had a filemaker server so that a number of staff could use it. In 1994 I built my own personal finance database that I still use today. It contains every penny I've spent since 1994. Starting in 2008 I have built increasingly complex relational databases to manage the geodata for the free maps that I offer at https://boydsmaps.com

Like I said, I don't like the price and don't like the restriction on installation. I guess I could switch to something else, but why should I re-invent the wheel? So I will upgrade (reluctantly) and hopefully that will last me for another 10 years. The thought has occured to me, however, that I could just continue with my existing FileMaker 11 with a virtual machine in Parallels when I upgrade to a new Mac. But the new version does seem to have some nice features. I will certainly try the 30-day free trial at least.
Score: 7 Votes (Like | Disagree)

Boyd01
I have so many legacy filemaker databases that I don't want to switch. Have been planning to upgrade for quite awhile, and will have to when I finally make the transition to Catalina, since my old 32-bit version will finally stop working. This looks like a nice upgrade, I especially like the idea of Javascript integration. Look forward to giving it a try soon.
Score: 6 Votes (Like | Disagree)

I don't understand who uses this product or why is Apple, the $60B in cash company, is still keeping it around (but somehow magsafe was too much). I don't even know who are the competitors to this product. I can't think of a situation where someone would say "I need FileMaker"

Its also expensive. I am sure there is some open-source alternative.

The situation is: We need a specific DB that fits our workflow....we don't want to change our workflow to fit off-the-shelf DB options, and we don't have or want devs to create it.

There is not much out there (last I checked) that can hit the sweet spot of power vs ease of creation, reporting, and mods, and works on Macs, Win, and iOS that FM does.
Score: 6 Votes (Like | Disagree)

martyjmclean
This seems like a solid upgrade! The last few have been lacklustre imo.

It’s nice you can still buy a perpetual license as well.
Score: 5 Votes (Like | Disagree)

Really, Filemaker is about decent performance with a great UI builder. It's brutally easy to make something that's easy to use, performs well, and needs no maintenance.

They missed the client-server boat, but they could probably have a big niche in mobile/tablet solutions if they wanted to market it that way. I'm still annoyed that they killed Bento, and their pricing is prohibitive, but as an easy way to build database-driven good looking solutions it's still one of the best.

Their problem is they're part of a company again, and it doesn't sound like their management is into the whole "lose money and grow" train. Instead, they're on the "let's milk our existing customers" train.

If this was cheaper and my 50-year-old self had the time or energy to learn it from the ground up, I'd think of all kinds of uses for it - helping my wife track client info for her at home business, building a membership directory for my church, building a personal financial tracking system...but frankly I've got a lot of online streaming TV to watch and learning to build a database is just too far down the list.
Score: 4 Votes (Like | Disagree)
Read All Comments