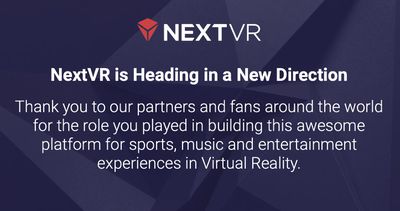 New's of Apple's planned NEXTVR acquisition first surfaced in April, but it appears the purchase wasn't completed until recently. Apple reportedly spent around $100 million to purchase the company.

The NextVR website has disappeared, and there is a message that says the company is "heading in a new direction." Apple gave Bloomberg its standard acquisition statement: "Apple buys smaller technology companies from time to time and we generally do not discuss our purpose or plans."

Prior to its acquisition by Apple, NextVR had established partnerships with the NBA, Wimbledon, Fox Sports, the WWE and more, plus it holds more than 40 patents that could be of interest to Apple.

Apple has been working on multiple augmented, virtual, and mixed reality headsets over the course of the last several years. Just today, Apple analyst Ming-Chi Kuo said that Apple's augmented reality Smart Glasses that are in the works could launch in 2022.

Along with the smart glasses, there have also been rumors indicating Apple is working on some kind of virtual reality headset that would feature an 8K display for each eye and that would be untethered from a smartphone or computer.

gamesandtheory
The next major leap forward in consumer VR has got to be a headset that isn’t a heavy object pressing firmly against your face. Hoping a lightweight “smart glasses” form factor can deliver immersive VR in addition to AR, with minimal skin contact.
Score: 5 Votes (Like | Disagree)

There is a HUGE Disconnect here !

Either they have something, & thus would have a value far north of $1B USD, OR they don't have much, & that's where the $100M USD comes in !

I've been following NextVR for a while. The promise sounds fantastic, but the implementation has been horrible. They don't explain what their service is, and they don't tell you what their content is or how you can access it. You could download a mostly-broken app and have a frustrating experience that leaves you still not knowing what they're trying to offer.

Basically it was a great idea run by people with no idea what they were doing and no understanding of technology, and because of that no customers and revenue, so all they had was a massive burn rate.

That's why it sounds like a $Billion idea and the price is so slow. It could easily be a multi-billion dollar product for Apple if they take it and do anything decent with the tech.
Score: 3 Votes (Like | Disagree)

Apple reportedly spent around $100 million to purchase the company.

Prior to its acquisition by Apple, NextVR had established partnerships with the NBA, Wimbledon, Fox Sports, the WWE and more, plus it holds more than 40 patents that could be of interest to Apple.

There is a HUGE Disconnect here !

Either they have something, & thus would have a value far north of $1B USD, OR they don't have much, & that's where the $100M USD comes in !

Another possibility, a VC fire sale !
Score: 2 Votes (Like | Disagree)

MacsRgr8
That's cool.
I had the impression AR had the focus, not so much VR.
Score: 2 Votes (Like | Disagree)

Secondempire
Well this was a logical next step for Apple
Score: 2 Votes (Like | Disagree)

Attirex
IBF comments about how bc of pandemic, cancelling of large entertainment events (maybe forever?j), and stay-at-home orders, this is a "smart buy."
Score: 2 Votes (Like | Disagree)
Read All Comments