Apple today updated its COVID-19 screening app, which was created to help people stay informed and take the proper steps to limit the spread of the coronavirus. 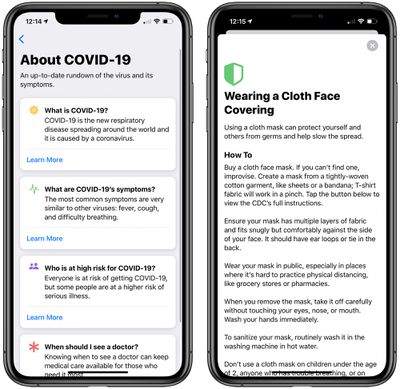 The new version of the app includes updated symptoms and recommended actions that align with the CDC guidelines. The CDC this week added several new symptoms that can be signs of the coronavirus, including chills, shaking with chills, muscle pain, headache, sore throat, and new loss of smell or taste.

Apple's updated COVID-19 app also includes tips for wearing a cloth mask to protect yourself and others from the coronavirus. The mask section includes tips on creating a mask, how to wear it, where to wear it, and how to sanitize it.

Apple has also updated its accompanying COVID-19 website to provide the same information.

Apple developed the COVID-19 app and website in partnership with the CDC, White House Coronavirus Task Force, and FEMA. Along with the features introduced today, the tools provided by Apple let users answer a series of questions on risk factors, recent exposure, and symptoms to receive CDC recommendations on the next steps that they need to take.

The screening tool is available to anyone who is 18 years or older in the United States. Data provided in the COVID-19 app and on the website is not shared with Apple, the CDC, or other government agencies.

Dreadful that so much poorly thought-out virtue-signalling nonsense is costing more lives than the virus itself. The misleading manipulation of people into senseless hysteria is sickening.

You know, two nearby hospitals in Central Europe have been following different paths. One has been treating patients according to virtue-signalling centralised edicts; the other has been treating on personalised patient needs. The first has a 60 per cent death rate. The second has zero per cent.

Panic, hysteria, poor management, misinformation, virtue signalling, and a total lack of leadership are doing so much avoidable harm.

As for virtue signaling I’m sick and tired of the ads corporations are putting out about how they care for their customers more than anything, are here for us, and we’ll get through this together all the while syrupy music is playing in the background. I want to vomit
Score: 13 Votes (Like | Disagree)

MacHiavelli
Dreadful that so much poorly thought-out virtue-signalling nonsense is costing more lives than the virus itself. The misleading manipulation of people into senseless hysteria is sickening.

You know, two nearby hospitals in Central Europe have been following different paths. One has been treating patients according to virtue-signalling centralised edicts; the other has been treating on personalised patient needs. The first has a 60 per cent death rate. The second has zero per cent.

Panic, hysteria, poor management, misinformation, virtue signalling, and a total lack of leadership are doing so much avoidable harm.
Score: 11 Votes (Like | Disagree)

AngerDanger
Nothing says "COVID-19 infected cell" quite like a cartoon ship steering wheel.

Well-said. The entire point of closing up was to slow the spread and prevent the healthcare system from being overloaded. Well, that's done, so we should be free to live our lives, right?

It's not done. The restrictions are the only thing that keep the case numbers from growing exponentially again and overwhelming the healthcare system. Think about it: nothing has changed from earlier this year when the virus first started cirulating. We have no vaccine, no cure, and are far away from "herd immunity". Why would you think the result would be any different now if all restrictions were lifted?
Score: 7 Votes (Like | Disagree)

Rocko99991
Who's mask recommendation is this citing? WHO said there was no evidence that wearing a mask in the community prevented healthy people from picking up the virus.
Score: 5 Votes (Like | Disagree)

We don't know precisely, but all indications are (once you rule out unreliable testing) is that people are not getting reinfected. Long enough to generate herd immunity and kill this thing.

This is just empty speculation.

Lots of things.
1. We know with a high degree of certainty who the most vulnerable are. They should be quarantined and protected to the best of our ability, which will significantly limit deaths.

Not really. The doctors who are actually treating patients still discover new aspects every day, such as that young people may be at a risk of stroke even if they escape lung infection.

2. We know that heat also slows this thing down considerably, well guess what season we're heading towards? It's already warming up in NYC significantly, which should improve things a good deal.

Actually, we don't know that at all. The virus is spreading rapidly in some countries with warm climates.

3. Individually we have all learned to benefits of social distancing, washing our hands, and wearing masks (gloves don't really help). That too will significantly slow down the spread.

We still don't know exactly how much masks actually help, for example.

You didn't get the point. If you want to open up the economy fully, the average human does not have a choice in many cases. For example, in normal times here in the Bay Area, hundreds of thousands of people per day are dependent on crowded public transport to get to work since roads and highways don't have have the capacity for everyone to use their own car. It's the same in many major cities around the world. And movie theaters were troubled economically before the crisis, many won't survive if they have to cut the number of seats in half or less. The same goes for air travel if the number of passengers per flight has to be cut because middle seats can no longer be used. And so on.

Now, if NYC wasn't run by a buffoon, the logical solution to your bus and train problem would be to run extra trains to keep the density in the trains and buses low, and that would allow some social distancing.

Have you even been on the NYC subway? The trains already run back to back during rush hour. The capacity of any transport system is limited.

You mean the ones you listen to.

I mean the ones who have spent their lives studying the issues. What qualification do you have to know better?

We live in a fascist country today, largely because of those tech giants. There is only one correct viewpoint. While we all admit that we don't have all the information, somehow many have come to the conclusion that there is only one possible answer. A strange contradiction.