PSA: iPhone SE's Haptic Touch Doesn't Work With Notifications and It's Not a Bug

Customers who have purchased the new 2020 iPhone SE have found a surprising missing feature - Haptic Touch does not work with notifications.

On the 2020 ‌iPhone SE‌, long pressing on a notification in the Notification Center or on the Lock screen does not appear to bring up rich notification options to allow ‌iPhone SE‌ users to interact with incoming content. 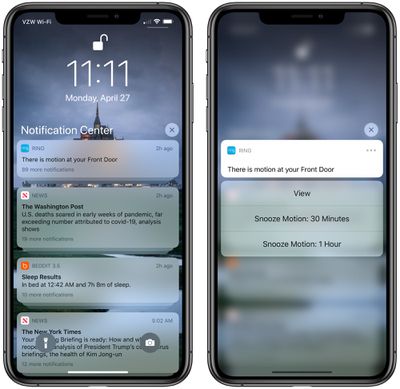 Rich notifications accessed with ‌Haptic Touch‌ on an iPhone 11 Pro
There have been complaints about the missing feature on Reddit and the MacRumors forums. From Reddit:

I received my SE yesterday and very quickly realized that Haptic Touch is not supported on notifications. I am not seeing this reported anywhere, haven't seen one review mentioning it, no video I watched mentioned it. Haptic Touch works for peek and pop, and on icons on the home screen but if you are on the lock screen or Notification Center and try to long press an email to archive, or a text to quick reply you are out of luck.

With Haptic Touch-enabled devices like the ‌iPhone 11‌ and 11 Pro, long pressing on a notification in the Notification Center or the Lock screen brings up interactive options based on the app sending the notification. An Apple News notification, for example, brings up options for reading the full story, sharing a story, or saving for later, while an email app might offer options to reply and delete an incoming message without needing to open the app.

In our testing, we were not able to long press on a notification to view these interactive options, as the long press functionality did not work. We also tried on an iPhone 8, which the ‌iPhone SE‌ is based on, but we were able to get the rich notifications to work on that device, which has 3D Touch.

While ‌iPhone SE‌ users cannot long press on notifications on the Lock screen or in the Notification Center, there does appear to be a ‌Haptic Touch‌ option when pressing on an incoming notification when the ‌iPhone‌ is in use.

A Reddit user called Apple Support and was told there was no software update planned to fix the behavior, but Apple Support can be unreliable when it comes to information about new hardware releases.

Update: According to TechCrunch's Matthew Panzarino, the lack of ‌Haptic Touch‌ for notifications on the ‌iPhone SE‌ is not a bug and the feature is working as Apple intended.

I have not been able to determine whether there is any technical reason why or not. But it is 'working as intended' currently. I'm probably not an iPhone SE customer due to iPhone 11 camera stuff, but this would stop me from buying one. — Matthew Panzarino (@panzer) April 27, 2020

Update 2: MacRumors forum members have pointed out that it's possible to slide to the left on a notification and tap on the "View" option as a workaround for the missing ‌Haptic Touch‌ feature.

jclardy
This better be a bug, as a dev having to “inform” users of the various interactions (3D touch, Haptic Touch, drag down) on notifications sucks...and then having a random brand new device not support it at all makes it even worse.

My guess is the SE has a modified iPhone 8 version of iOS, which is expecting 3D touch to access these things.
Score: 23 Votes (Like | Disagree)

macduke
People are saying this is a bug, but it works this same way on the old iPhone SE. It's Apple segmenting software features, even though it leads to an inconsistent UI and user frustration. It's not even a big thing, it's a little thing, and it's annoying that they've decided to do this. Hopefully they reverse course.
Score: 14 Votes (Like | Disagree)

Stromos
I would say it has to be a bug otherwise it's purely a we are holding back features on the cheaper phone.....
Score: 14 Votes (Like | Disagree)

dontwalkhand
I am hoping this is just a bug. Though I will be honest, I don't think I ever used this feature on my 11 Pro.
Score: 9 Votes (Like | Disagree)

zorinlynx
This is most likely a bug. There's some apps like Duo that require this functionality to work!
Score: 8 Votes (Like | Disagree)
Read All Comments

Wednesday May 11, 2022 11:16 am PDT by Tim Hardwick
It's been over 200 days since Apple debuted its redesigned MacBook Pro lineup. Offered in 14-inch and 16-inch display sizes, the new-look MacBooks wowed Apple fans and creative pros alike with their powerful custom Apple silicon, mini-LED screen, and multiple connectivity options. But there are still some things you can't do with a MacBook Pro. Here are five features some Mac users are still...
Read Full Article • 265 comments

Friday May 13, 2022 2:25 pm PDT by Juli Clover
Apple earlier this week announced the discontinuation of the iPod touch, and because it was the last iPod still available for purchase, its sunsetting effectively marks the end of the entire iPod lineup. To send the iPod on its way, we thought it would be fun to take a look back at some of the most notable iPod releases over the last 21 years. Original iPod (2001) Introduced in October...
Read Full Article • 90 comments

Thursday May 12, 2022 7:29 am PDT by Hartley Charlton
While there are as yet no concrete rumors related to which devices iOS 16 and iPadOS 16 will support, the discontinuation of the iPod touch earlier this week may be an indication that as many as nine devices could be about to lose support for Apple's upcoming operating systems. iOS and iPadOS 13, 14, and 15 support all of the same devices, with the iPhone 6S and iPhone 6S Plus,...
Read Full Article • 154 comments