Jackson started things off by speaking a bit about her background and what inspired her to advocate for the environment and join the EPA prior to taking on her current role at Apple. 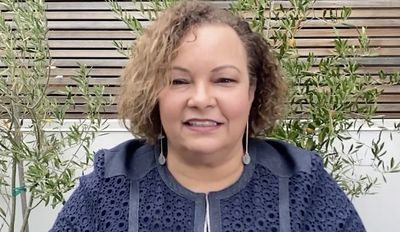 Before coming to Apple, I led the Environmental Protection Agency under President Obama. But long before that, I was an 8-year-old girl who saw my neighbors in New Orleans battling illness caused by chemical plants in our backyard. A girl who in 1970, wrote a letter to President Nixon imploring him to do something to protect the health of the people and the environment. That same year, we celebrated Earth Day in the U.S. for the very first time. And by the end of 1970, the EPA had officially opened its doors.

At the time, I had no idea I'd go on to work at the EPA and one day lead it, but I did know that at the heart of my concern for the planet was the health of people. Communities, families, people who deserve a healthy place to live, clean water to drink, and clean air to breathe.

Jackson went on to explain that every individual, business, and organization must take action to address climate change. "Policy is one solution, innovation is another," she said before delving into Apple's environmental efforts.

As Apple has said many times in the past, all of its facilities worldwide are run on renewable energy, and it has a program to help suppliers transition to 100 percent renewable energy as well. Apple has also been focusing heavily on using recycled materials in its products, with an ultimate goal of a closed-loop supply chain that relies solely on recycled materials and does not require minerals mined from the earth.

Jackson wrapped up her appearance with an inspiring message for up and coming environmental advocates.

On this 50th anniversary of Earth Day, we have much to be proud of, much to hope for, and much more to accomplish. Today's eight year olds are facing even greater challenges, but they also know a thing or two about the urgent work that lies ahead and that the health of our planet and our neighbors is a cause worth fighting for.

Jackson's full appearance can be watched on Twitch. To celebrate Earth Day, Apple is also highlighting Earth Day related apps in the App Store, but as stores are closed there are no retail store decorations nor is there an Apple Watch activity badge to earn.

False. Apple has a worldwide recycling and trade-in program that takes any Apple device, and their environmental record is second to none. 100% renewable energy in all their facilities, recycled enclosures, great year-over-year reduction in carbon footprint. The numbers speak for themselves. Lisa Jackson is first in class.

A small amount of Apple devices are recycled by Apple. Apple requires all other recyclers to shred Apple devices to ensure they are not broken down for parts. Apple opposes right to repair. Apple heavily restricts access to replacement parts. Yeah, but they buy enough credits to be green, and, obviously, their PR and marketing departments are working well.
Score: 15 Votes (Like | Disagree)

sideshowuniqueuser
While Apple continues to make products with soldered and glued components, and refuse to sell simple spare parts, making it difficult to upgrade, repair, and extend the life of products, any attempt to talk about their care for the environment is vomitous hypocrisy. On this 50th anniversary of Earth Day, Lisa Jackson, your job a joke.
Score: 15 Votes (Like | Disagree)

While Apple continues to make products with soldered and glued components, and refuse to sell simple spare parts, making it difficult to upgrade, repair, and extend the life of products, any attempt to talk about their care for the environment is vomitous hypocrisy. On this 50th anniversary of Earth Day, Lisa Jackson, your job a joke.

False. Apple has a worldwide recycling and trade-in program that takes any Apple device, and their environmental record is second to none. 100% renewable energy in all their facilities, recycled enclosures, great year-over-year reduction in carbon footprint. The numbers speak for themselves. Lisa Jackson is first in class.
Score: 7 Votes (Like | Disagree)

Apple has no moral high ground given how our precious toys are produced
Score: 7 Votes (Like | Disagree)

Totally agree. In addition the entire notion of the "renewable energy" is false. Do you know what is amortization period for the solar panels installed on top of the new Apple building? At least 10 years. And this is only financial aspect. How about polluted water which had to be used during production of those panels? If it is not hypocrisy what is it?

Energy is transferred/transformed. Rather than renewable I prefer sustainable, there are too many falsehoods of people and companies marketing to do good when in fact they fail to see the entire picture with its product cycle from design, creation, production (includes acquiring raw materials), transportation, usage and finally disposal (repurposed). Apple is one of the few companies that does a good job, probably because their were under pressure from Green Peace along with other companies and has gradually changed to align its company with the mindset of younger consumers.

Many companies "Green Wash", I am not saying that Apple may or mayn't be participating in this to some degree, I am just saying their track record of recent history is better than others in this space.

It is more environmentally friendly to hold on to an iPhone that will last 3-5 years with the latest iOS update compared to the competition that will be replaced in 18-24 months with maybe 1-2 security updates and if lucky a major OS update. What pollutes more with the entire product cycle compared to an iOS device.

False. Apple has a worldwide recycling and trade-in program that takes any Apple device, and their environmental record is second to none. 100% renewable energy in all their facilities, recycled enclosures, great year-over-year reduction in carbon footprint. The numbers speak for themselves. Lisa Jackson is first in class.

Maybe you have heard about the three Rs - Reduce, Reuse and Recycle. They are written in the order of priority. Reducing consumption and reusing is much more environment friendly than recycling. So if apple makes their repair parts available and make repair easier, a lot of people can reuse their devices for a much longer time and thereby reduce consumption.
Score: 2 Votes (Like | Disagree)
Read All Comments

Sunday January 16, 2022 8:56 am PST by Sami Fathi
Continuing the tradition set with the iPhone 13 Pro, only the highest-end iPhone 14 models will feature Apple's ProMotion display technology, according to a respected display analyst. Ross Young, who on multiple occasions has detailed accurate information about Apple's future products, said in a tweet that ProMotion will not be expanded to the entire iPhone 14 lineup and will remain...
Read Full Article • 56 comments