Apple could be developing a version of Xcode that runs on iPads, according to a new rumor circulating this week. The capability has been linked to the release of iOS 14 by rising Apple leaker Jon Prosser, and if true, it would enable full-scale app development to take place on Apple's mobile devices for the first time. 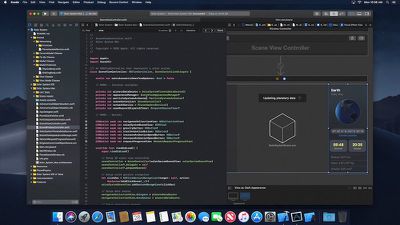 Developers use Xcode to create apps for iOS, watchOS, tvOS, and macOS. However, Xcode is a complex app and has only ever been available on Mac. While Apple offers the Swift Playgrounds app for learning about coding on mobile, it has never indicated that it has any plans to bring Xcode to iPad.

But according to a tweet posted on Monday by Prosser, Xcode "is present on iOS/iPadOS 14," the implications of which are "huge" because it "opens the door for 'Pro' applications to come to ‌iPad‌."

Responding to Prosser's tweet, iOS developer and MacRumors writer Steve Moser noted that a hidden Xcode Preview app is present in iOS 13 that acts as a companion app for showing layout previews on device from the main Xcode Mac app. However, Prosser appears to be referring to the existence of a native full-fat version of Xcode for ‌iPad‌.

I’m not gonna say that Final Cut is coming to iPad... But XCode is present on iOS / iPad OS 14. 👀 The implications there are HUGE. Opens the door for “Pro” applications to come to iPad. I mentioned this last week on a live stream, but figured it was worth the tweet 🤷🏼‍♂️ — Jon Prosser (@jon_prosser) April 20, 2020

Such a step would be a big undertaking for Apple, requiring an overhaul of Xcode's interface to take advantage of the ‌iPad‌'s primarily touch-based operating system. If successful though, it could make full-scale app development a possibility for mobile users who don't have a Mac.

Hopefully we'll hear more at this year's virtual Worldwide Developers Conference, where Apple will reveal annual updates to all of its operating systems, including its plans for iOS 14 and iPadOS 14.

johnalan
Jesus I can barely enjoy using Xcode on my top end 16inch. I could not Dev a serious app on an iPad.
Score: 18 Votes (Like | Disagree)

nfl46
Finally putting those powerful iPads to use. Make it happen, Apple!
Score: 12 Votes (Like | Disagree)

recoil80
I don't expect the same experience macOS can offer. They may port Xcode to the iPad, but what if your build scripts require python or ruby or shell scripts? We won't have full access to the file system, it would be a huge change in iPadOS and I don't expect that.
So it will be a "baby" version of Xcode. I'd say better than nothing, now we have Swift Playgrounds but is very limited. I wouldn't say no to the ability to edit my source in Xcode on an iPad, but I don't expect to be able to work only on iPadOS for the entire lifecycle of an iOS app. And I love big displays when it comes to coding, my laptop is the 16" and I use it with an external display whenever possible, so using only iPadOS would be out of question. But that's a personal preference more than a technical limitation. For a quick edit iPad would be sweet, so in the end it is a good news, but not a breakthrough.
Score: 12 Votes (Like | Disagree)

Hoping 14.0 brings further improvements to multitasking too. The future is bright for the iPad.
Score: 10 Votes (Like | Disagree)

flottenheimer
I guess Apple is porting *everything* to run natively on ARM.
Right now for iPad where it makes sense but soon for the transition to ARM based Macs.
Score: 10 Votes (Like | Disagree)

robbieduncan
I am expecting it will be limited to iOS/iPad OS app creation: no Mac apps
Score: 6 Votes (Like | Disagree)
Read All Comments