Apple this week has expanded its "Look Around" feature for Apple Maps to include Chicago, the latest major U.S. city to gain the 3D street-level imagery to compete with Google's Street View. 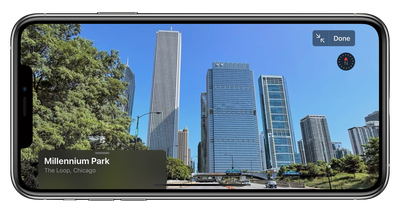 The expansion of Look Around to Chicago has been documented in detail by Justin O'Beirne, who notes that this brings the total number of metropolitan areas with Look Around to ten. The most recent expansion prior to this week came in February when Boston, Philadelphia, and Washington, D.C. were added.

As O'Beirne notes, while Look Around only covers 0.3 percent of the land area in the United States, it covers 13.8 percent of the U.S. population. That's still a far cry from Google's nearly ubiquitous Street View coverage, although Look Around has been compared favorably to Street View for the quality of its imagery and the smoothness of transitions as you navigate around.

In areas where Look Around is available, a binoculars icon will appear in the top-right corner of ‌Apple Maps‌. Tapping that icon opens a street-level view in a card overlay at the top of the screen, which can then be expanded to a full-screen view. Look Around also appears in the search results for a supported city, below the Flyover and Directions buttons.

Apple is unsurprisingly prioritizing the largest cities in the U.S. with its Look Around feature in order to most efficiently cover the largest number of people, with O'Beirne noting that eight of the ten Look Around areas rank among the ten largest urban areas in the country. The two outliers, Las Vegas and Honolulu, are major tourist destinations and thus also prime targets for the feature.

O'Beirne has much more in his blog post on the expansion, including some predictions on which cities might be next to see Look Around.

redneckitengineer
The positive thing here is you can walk around Chicago without getting shot at now...heh
Score: 9 Votes (Like | Disagree)

TwoBytes
Best time for Apple to take pictures now nobody is around #lockdown
Score: 8 Votes (Like | Disagree)

Maps is getting better. I still get frustrated with POI search results and directions. Yesterday, had I not double checked where it was sending me, I would have gone to a nursery 20 miles in the opposite direction of where I was headed. There are 3 with the same name in my area, and the one closest to me will only show up when I zoom in to that specific area and search (even though it is significantly closer than the other two). I'm glad to see Apple investing heavily in Maps, and I think it will possibly surpass Google Maps at some point. However, aside from Look Around being better than Street view in these locations, it still has a ways to go.

I agree it is getting better, and I hope it continues to do so. However, I don't see it surpassing Google Maps any time soon as you mention. My reasons are:

First, Apple Maps is practically useless outside of the U.S., it is not even very accurate in US mainland either. I still get very weird routes and horribly inaccurate Estimated Times of Arrival. I live in Austin, one of the first cities where Maps was supposed to be optimized, and I was still getting ETAs of 11 hrs for very close distances. Sometimes it recommends me to drive in loops around my location, weird.

Second, and very important, is the detail, Google Maps tells me exactly which lane I should stay on, the specific exit in both the written and verbal directions, something that I don't understand why Apple Maps doesn't do.

Third, the availability of data, it is just not on par, Google Maps is a lot more up to date, I am moving to a new house in a couple of weeks and I can see the foundations and pipe connections of my new home in Google Maps. In Apple's the subdivision doesn't even exist yet, it looks like a forest. In other countries I have visited you still get street names, cities and monuments descriptions from the pre-Cold War area, I have reported so many times the name of the city where my mother live is incorrect and they still haven't changed it after about 5 years and more than 10 reports.

Fourth, the handling of location markers and pins. Current iOS doesn't even let you delete pins you dropped in previous versions of Maps, stupid. Google Maps lets me place pins and important locations of job sites and it handles these type of situations better overall... And when you pair it with Google Earth it is even more powerful.

Fifth, it is restricted to the Apple ecosystem, limiting the user base and potential growth.
Score: 6 Votes (Like | Disagree)

cflem
Looks like Dallas should FINALLY be in the next update - its big - so I'm sure its a daunting task.
Score: 3 Votes (Like | Disagree)

The positive thing here is you can walk around Chicago without getting shot at now...heh

The city has a rich and wonderful history--up until about 1950--when Daley's wrecking ball began to swing.
Score: 2 Votes (Like | Disagree)
Read All Comments